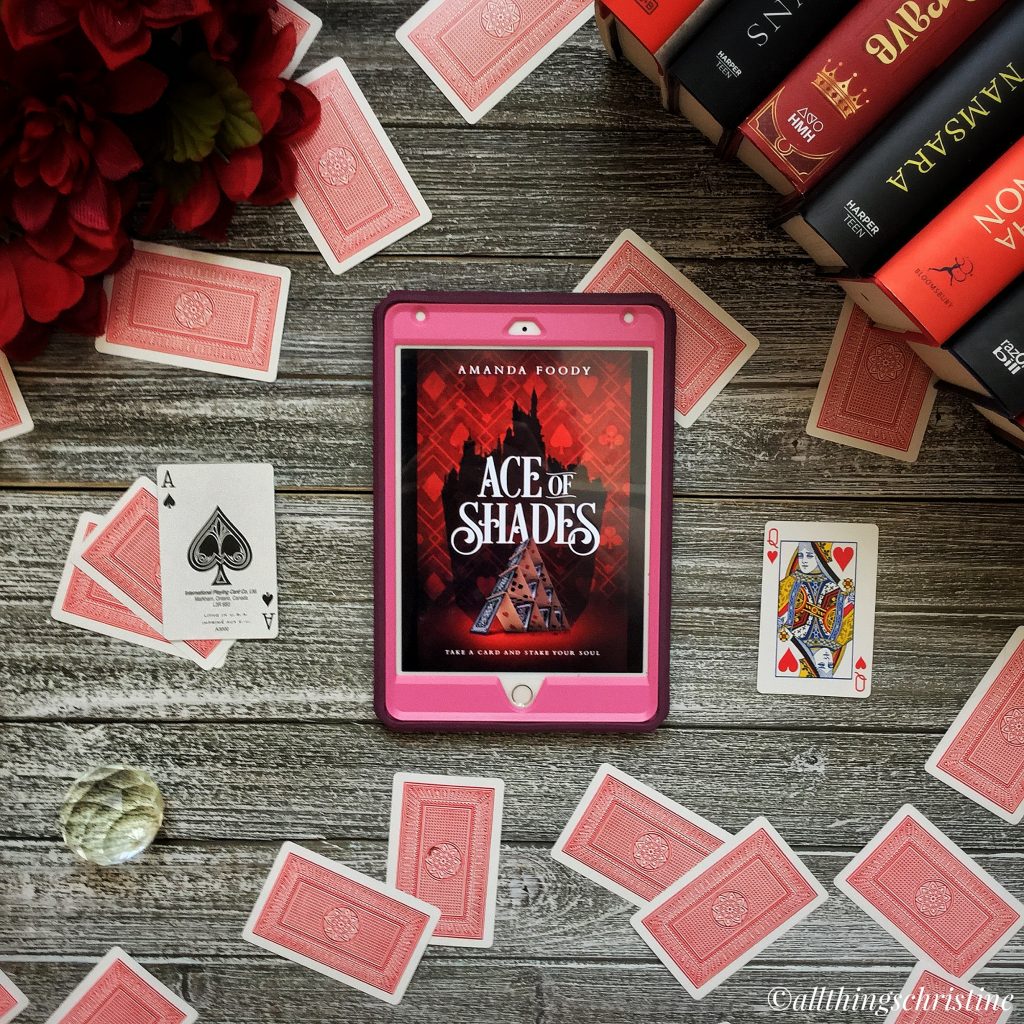 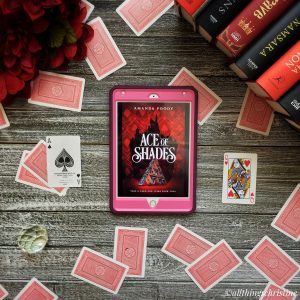 Welcome to the City of Sin, where casino families reign, gangs infest the streets…and secrets hide in every shadow

Enne Salta was raised as a proper young lady, and no lady would willingly visit New Reynes, the so-called City of Sin. But when her mother goes missing, Enne must leave her finishing school—and her reputation—behind to follow her mother’s trail to the city where no one survives uncorrupted.

Frightened and alone, Enne has only one lead: the name Levi Glaisyer. Unfortunately, Levi is not the gentleman she expected—he’s a street lord and con man. Levi is also only one payment away from cleaning up a rapidly unraveling investment scam, so he doesn’t have time to investigate a woman leading a dangerous double life. Enne’s offer of compensation, however, could be the solution to all his problems.

Their search for clues leads them through glamorous casinos, illicit cabarets and into the clutches of a ruthless Mafia donna. As Enne unearths an impossible secret about her past, Levi’s enemies catch up to them, ensnaring him in a vicious execution game where the players always lose. To save him, Enne will need to surrender herself to the city…

And she’ll need to play.

DISCLAIMER: I received an eARC copy of this book from the publisher (Harlequin Teen) via Netgalley. In no way has the publisher or the author influenced my review, all opinions are my own. Also, this review contains spoilers for the plot and the characters in the book so do not read if you don’t want to be spoiled. You have been warned.

I could really see the Spirited Away parallels in the book. A girl who ends up whisked away to somewhere unlike she has ever been before with an evil witch cursing her and her making her mark in that new world while finding out who she really is and what strengths lay hidden within herself. While nothing can replace the original for me, I loved seeing the little bits and pieces in the book remind me of a certain scene in the movie or a certain character.

Enne really annoyed me as a character at first. She was waaaaaaaaay too naïve, when she came to the city. She knew how horrible the city could be and still came l she and this world are way too obsessed with title and labels. I really only started to like her as a character when she is in her way to the Shadow Game and she ends up killing Sedric (which didn’t come as a surprise), taking control of her destiny and surrendering to her powers and her fate. I just say that the coin she keeps from Lourdes and the one she replaced it with must have something to do with her Mizer blood. It must be some sort of identification for Mizers, as only Mizers seem to be able to see the purple eyes and feel the warmth.

Levi was quite the interesting character for me because I seemed to have a love/hate relationship with him. I liked how he would tease Enne and could be gruff with her but in the end he would always comfort and help her. I can understand his obsession with money because he wanted to get that debt paid off, but I don’t like his thrill seeking side or addictive personality. I didn’t like how while I know he and Enne weren’t actually dating or anything. He really does have an addictive personality and I think he has an addiction to gambling and adrenaline which is why it didn’t really make sense to me at the end of the book where he decides while he likes Enne, she’s too much of a risk. I know Levi is just thinking with his common sense for once but I’m quite upset that he considers Enne a threat and he’s drawing his line in the sand. His family is just as much attached to the monarchy as hers is.

Vianca was kind of an odd amalgamation of characteristics. She was ruthless, evil and cunning, she was a staunch monarchist (which seemed like such an odd twist for her character), she was feared but also feared herself, she really does seem to care about Levi, but then tricked him into her scheme in the first place. For me, the most intriguing thing about her was her omertas. I have a few unanswered questions about them too. Who is the third person who has the omertà? The friend that was on the bank account said it was another boy, so I wonder if it is a character we’ve already met? I couldn’t really tell towards the end but does Enne’s Mizer powers trump the omertà? Just how unbreakable is this curse? How is Vianca going to use Séance in the future? Why is it so dangerous for Vianca to find out Enne is a Mizer? She is a staunch monarchist so wouldn’t she be thrilled? Other than the fact that she would have a Mizer under her power to do whatever she wants. But is that really the only threat? Or more?

The friendship that Enne had with Lola, that hating each other to becoming friends was really cute and I feel like it was really needed in the story. The blood oath was interesting as was the fact that it technically made Enne a street lord. Is she going to set up her own empire? I have a feeling people are going to find out she is a Mizer and the monarchists are going to want to set her up as the new Queen with Levi as her orb marker. This was what I think Lourdes was setting her up as, to become the new Queen of the new monarchist empire she was trying to set up. But why was Lourdes so involved with the monarchists in the first place? She obviously had ties in her previous like to the monarchy and the Mizers if she was entrusted with Enne. But does Lourdes want to re-establish the monarchy to keep Enne safe or because she actually believes in it. I believe Lourdes was a lady-in-waiting or as her talent is a Protector, some kind of bodyguard? She was connected to them somehow as a young girl which would have to mean she grew up in service or a lady but I don’t get that kind of feeling from her as a character.

I didn’t really like Lourdes much but I must admit she is quite the enigma of a character. I felt like she cared for a Enne but also that she was basically grooming her for her Mizer heritage. She kept so many secrets from Enne which in the end me out her in more danger than if she had kept her in the loop. Speaking of Lourdes, I’m not exactly sure she’s dead. If there isn’t a body then to me she isn’t dead. Just because one supposed friend who turns out to also be the friend of Vianca says she’s dead and that she lost the Shadow Game doesn’t necessarily mean that she’s dead. My biggest proof is that wouldn’t Enne have felt the break of the protection bond? Another curiosity to explore in the next book.

One mystery that never was solved that I’m really interested in was who wrote Enne’s Guide book. That book is mentioned again and again throughout Ace of Shades and Enne relies quite heavily upon it but the author is never mentioned. Did Lourdes write it? Enne did say she found it in a shop in Bellamy, but what would such a place that is so prim and proper have a guide book about the City of Sin in it? It is a mystery which I hope doesn’t turn into a plot hole and does eventually get solved. Another mystery that was mentioned but kind of forgotten was where all of the bolts that were supposed to be in Enne’s account went? Did Lourdes give it to the Pseudonyms

The pacing of this book wasn’t necessarily bad because things were always happening and the days were progressing but I felt like there wasn’t very much traction happening in the overall storyline. It just felt like each day up until the deadline for the Shadow Game they were doing the same thing over and over. Enne would try to find some information on her mother, would find out something and then question something else; while Levi would just try to find a way to make money out of nothing to pay off his debt. I felt like the strong actually started moving along only when we got to the Shadow Game, which also happened to be the most interesting part of the book.

The Shadow Game itself was my favourite part and I definitely liked the entire book more after the Game. The Shadow Game was really interesting to me and I loved that the author spent the time to really flesh it out. It did take about me about 3 times of re-reading the rules to really understand the concept of the Game but it was well worth the time spent. It is so intricate, the fact that you essentially enter a magical contract by showing up to play the Game, that you bet with your life force, that you see your past, present and future in the cards, I loved it so much! I do wonder if that’s how these members of the Shadow Game has such long lives; they are sucking the life force from the players and using it themselves. I also wonder if Levi’s life has been shortened by half because Enne lost half of the orbs. How were these globes created? Why did they have such hatred for the Mizers that they killed them all lock, stock and barrel?

One other part I’m interested in is the history of the Mizers. It seems universally accepted in the book that the Mizer Kings and Queens were tyrants who controlled the people but I wonder if that is really true or just what they are meant to believe. Why were every single last Mizer except for Enne killed? Did it have to do with their power to create volts? I’m hoping in the next book we get some more of the history of the Mizers as Enne starts to learn more about her family history.

The epilogue was really intriguing and I can’t wait to see where it goes. Harrison, the prodigal son is coming back to burn down his mother’s empire. Will Vianca be happy to see him back? Will he be a help or hindrance to Enne and Levi? Will he give in to the temptation and take over the empire? Why did he receive a call from one of the people on Shadow Game? There are so many questions that need to be answered, I can’t wait to see what happens next.

Overall while it didn’t quite live up to my expectations it was still a really good start to the series. I really loved it towards the end of the book so I’m hoping the sequel will carry on in the same vein and I will adore it. I love the world building and the atmosphere and I’m looking forward to spending more time in New Reynes with Levi on the run as a criminal and see Enne really come into her own power.