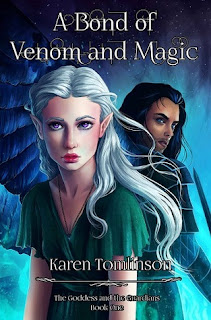 The Wraith Lord is hunting; his prize, the key to unleashing darkness and Chaos upon the eight Kingdoms.For Diamond Gillon the war raging in the south seems a remote danger until her home is brutally attacked. Having lost everything she holds dear, Diamond is catapulted into a terrifying new world in which legendary beasts arise, magic is condemned and half blood fae, like her, have no rights. Despite her growing feelings for her saviour, Commander Hugo Casimir, he remains a paradox – not only is he a heartless killer, he is owned by the cruel immortal fae queen; a queen who will murder her own people for magic.As Diamond’s circumstances become ever more perilous she is drawn deeper into Hugo’s world and discovers the lengths to which he will go to save what he holds dear. Will Hugo become her friend, her protector, or – an enemy not worthy of her trust?

*DISCLAIMER: I received an eARC copy of this book from the author in exchange for an honest review. In no way has the author influenced my opinion, all opinions are my own.*


This book was a good start by debut author Karen Tomlinson. While this wasn’t one of those books where I couldn’t put it down, it has the makings for a good series.

The plot was pretty predictable and I wasn’t a fan of the instalove. I would’ve liked to see more antagonistic banter between Diamond and Hugo and I really didn’t appreciate the love triangle either. There are enough problems in the relationship between Hugo and Diamond that they don’t need the obstacle of a third person interfering as well in my opinion.

The pacing was a bit like a teenager first learning to drive, speeding fast and then coming to an abrupt halt. It seemed a bit jerky to me, but it has some action and fantasy as well as romance so there is something everyone can enjoy.

Diamond was a character that had her moments, but i never truly loved. I hated when she was just a lovesick fool but I also loved her when she had the guts to rebel even if the situation was futile. She was more the lovesick fool for most of this book though and always just seemed to follow whatever Hugo wanted her to do. I understand that she couldn’t protect herself but it seemed like she was perfectly fine with having no say in her future and what was happening to her. I did like the stubborn streak in her though and that she was proud enough that she refused to grovel.

I must admit that Hugo quite annoyed me as a character. I wanted to shake him with frustration and just yell why!?! I think a lot of the problems he faced could’ve been solved had he just been more open with Diamond and explain the situation. I could understand him not wanting to explain the venom bond, but why didn’t he explain about their Nexus bond? Why does he keep putting the woman he loves in dangerous situations? If he truly loved her, even if they had to be apart wouldn’t it be better for her? Why bring Diamond back to the Queen the second time when she was only going to be tortured and possibly killed and you were going to be horrible to her anyways?

Jack is the Prince of a country being used by the Queen merely for its’ forces. Jack was unfortunately the forgotten character for me. When he was there I remembered him but when he wasn’t actively involved in the plot I kind of forgot that he existed. His character kind of reminded me of a big, fluffy golden retriever puppy. He is the nice, caring Prince which I didn’t find that believable. Being brought up on the battlefield and losing so many of his people and his city should of hardened him but he is instead the forgiving, naive type who trusts much too easily.

The Queen really was the perfect bad guy though. Manipulative and destructive she is supposed to be the saint who is battling the evil Wraith Lord but she is really a horrible and ancient fae who abhors anyone who is different or better than she is. How could people follow her when she systematically destroyed entire magical races within the fae? I’m looking forward to Diamond coming into her power and taking that evil Queen down once and for all!

The world built in this book was a bit confusing at times and never fully explained, but the history that was mentioned really intrigued me and I can’t wait to learn more about it. It was the most interesting part of the book for me and I would love to see more of what is going on from the Goddess’ perspective. I also want to learn more of how she is related to Diamond and is this part of the reason why she is losing to Erebos? Because people no longer worship the Goddess? How did history become so perverse that people no longer worship the Goddess and instead worship Erebos?  I think what would have been the most beneficial for me was to have the tale of the Goddess and her brother right at the beginning of the book. Opening with that tale would have really set the tone and been a wonderful introduction into this world. It could also explain a lot of the magical terms that are used but not really explained. Maybe it will be in the second book!

I am curious as to what role this Master is going to play in the big scheme of things. We already know that the Master is Commander Rittion who is introduced at the end of the book, or at least I am assuming it is him. This group sees Diamond as the reincarnation of the Goddess which is close but not quite and to them she is their Saviour. But is this group here to support Diamond or merely use her as a pawn to their own ends? We will have to wait and see.

Overall it isn’t that this book was good or bad but it wasn’t memorable. It had enough interesting points that I will be reading the second book to see if it picks up in pace and in character development. I have high hopes since it looks like Diamond is over her doe eyed stupid in love phase and is moving on to becoming stronger and more in control of her destiny. If you’re looking for a light fantasy novel then you should check out this book. 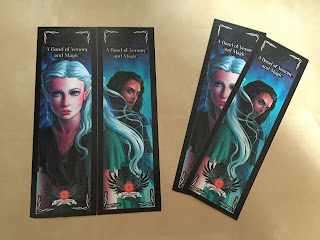 You can enter via the Rafflecopter link below for a chance to win one of the two sets of ABOVAM bookmarks! The best thing about this giveaway is that it’s international! Featuring the lovely cover art from the book, you definitely want to win these! Good luck to all entrants, this giveaway closes on October 31, 2016 at 11:59pm.

Waiting on Wednesday: The Hundred Lies of Lizzie Lovett