Book Review: An Ember in the Ashes By: Sabaa Tahir 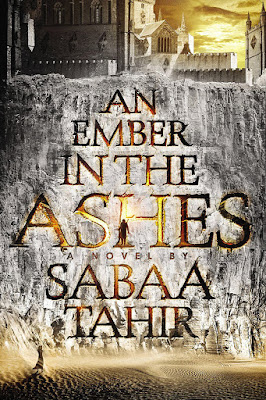 Laia is a slave. Elias is a soldier. Neither is free.
Under the Martial Empire, defiance is met with death. Those who do not vow their blood and bodies to the Emperor risk the execution of their loved ones and the destruction of all they hold dear.

It is in this brutal world, inspired by ancient Rome, that Laia lives with her grandparents and older brother. But when Laia’s brother is arrested for treason, Laia is forced to make a decision. In exchange for help from rebels who promise to rescue her brother, she will risk her life to spy for them from within the Empire’s greatest military academy.

There, Laia meets Elias, the school’s finest soldier—and secretly, its most unwilling. Elias wants only to be free of the tyranny he’s being trained to enforce. He and Laia will soon realize that their destinies are intertwined—and that their choices will change the fate of the Empire itself.

An Ember in the Ashes is the best book I have read in awhile. The book was super hyped by both the publisher and the book tube community who had the ARC early and I wasn’t going to read it. In the end a couple of my favourite book tubers gave it a good rating and so I decided to give it a chance and boy am I glad i did! My heart was pounding most of the time reading the book and I was addicted to it from the first 10 pages.
I love the world that was created. It was kind of inspired by Rome but still it’s own entity. Loved the Roman type world, I didn’t mind the Latin class names but I really didn’t like the Latin names for the characters. I get that it all melded together but for some reason the Latin names irritated me.
Now this is not the most original plot: a weak girl who has to rise up to save her family and her people who are lorded over by tyrants. But then the backstory and the mystical/paranormal elements are brought in. And brought in, in a way that is wonderful because the characters are wary and don’t believe in it themselves. Sabaa’s writing style is almost lyrical and it draws you in. So much so that you look up at the clock and realize you just read half the book and it’s 4 hours later!
I particularly think it is wonderful that there is real, visible character growth in the characters that you can see as you go along in the book. Laia makes me think of the saying “some are born to greatness, and some have greatness thrust upon them.” At the beginning she has a serious inferiority disorder but we see her in times of need come out of her shell and stand up for herself, her family and others. I love the way she is acts at the end of the book; confident and determined and I look forward to seeing more of it in the next book!

Elias on the other hand, I like that he’s not a momma’s boy and even though his mother hates the very sight of him and that he doesn’t try to earn her approval in any way. The best part for me about Elias is seeing him struggle with who everyone wants him to be and who he really is. Freedom of soul for him means being who he truly is even though they will kill him for it. Although we don’t have it as harsh in the modern day, it is a beautiful thing. Especially in today’s society with all the pressure we have to be normal and like everyone else.

What frustrated me the most was that even though her parents left the Resistance and the Resistance betrayed them she went to them not only for help but also believed in them so easily. I get that Laia after the death of her grandparents and the imprisonment of her brother she had no one to turn to except the Resistance but she believed everything they told her without proof! I guess that is her naivety in the beginning and how she learns to not trust everyone.I was so proud that Laia in the end didn’t blow up or kill anybody in Blackcliff Academy even when she had reason and enough anger to. Instead she only wanted to distract and that makes me so proud of her.
But I think my all time favourite part is that the Scholars are not poor innocents in this story. The greed of their ancestors brought the Martials down upon them. And in this world there is no simple answer and not everything is black and white because that is reality.
I can’t wait for more! I love to see a more kick ass Laia which I’m sure is coming in the next book. Overall an amazingly wonderful read and this is my #1 read of the summer! 5/5 stars and I wholeheartedly recommend you read this book! I absolutely cannot wait for the next book in this series! Let me know if you loved the book as much as I do in the comments below.