Book Review- Beast: A Tale of Love and Revenge
By: Lisa Jensen 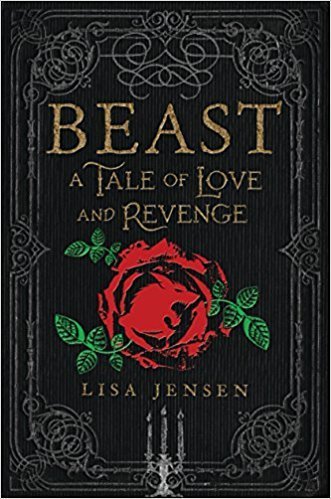 They say Château Beaumont is cursed. But servant-girl Lucie can’t believe such foolishness about handsome Jean-Loup Christian Henri LeNoir, Chevalier de Beaumont, master of the estate. But when the chevalier’s cruelty is revealed, Lucie vows to see him suffer. A wisewoman grants her wish, with a spell that transforms Jean-Loup into monstrous-looking Beast, reflecting the monster he is inside. But Beast is nothing like the chevalier. Jean-Loup would never patiently tend his roses; Jean-Loup would never attempt poetry; Jean-Loup would never express remorse for the wrong done to Lucie. Gradually, Lucie realizes that Beast is an entirely different creature from the handsome chevalier, with a heart more human than Jean-Loup’s ever was. Lucie dares to hope that noble Beast has permanently replaced the cruel Jean-Loup — until an innocent beauty arrives at Beast’s château with the power to break the spell.

Disclaimer: I was provided an eARC copy of the book by Candlewick Press. In no way has the publisher or the author influenced my review; all thoughts and opinions are my own.

This is the first time I have ever chosen to DNF a book. I stopped at about 32% because I just couldn’t bear to push myself to read any further. I don’t like to DNF Books because I personally feel like you have to read the full book to form a fully informed opinion on it. The reason I chose to DNF it is because when I read about this book, when I requested it there was no trigger warning attached or mentioned about this book at all. It was supposed to be a retelling of Beauty and the Beast from the Beast’s point of view. I was really excited about! Until I got to the rape scene about 20% of the way through the book. It came out of nowhere and really threw me for a loop. I was disgusted especially because the MC is supposed to fall in love with her rapist even after that? I pushed myself to read a little further but in the end I just couldn’t. I ended up only reading 1/3 of the book.

The writing style is kind of amateur and juvenile. The flow of the book is kind of odd too, it jumps from one place to another at whiplash speed. To me it felt like when you’re on the bumper cars and jerk forward at top speed only to bump into another car and quickly come to a full stop. That kind of jerking forward motion is how I felt the book progressed. I ignored it for the most part but it certainly didn’t make for an enjoyable read.

Finally I have to talk about the lacklustre characters that exist in this book. I didn’t read far enough to really get an impression of “The Master” (aka the Beast) which I’m and of itself is a failure. So in that regard I will be focusing on the main character Lucie. Good lord Lucie was an annoying lovesick swooning girl after she meets the Master. I hate those heroines where their world is changed and made amazing by a man. I find it over dramatic and demeaning. Also, I felt like she turned into quite the woman scorned afterwards and especially when she was watching her revenge on the Beast. I just felt like overall Lucie was very shallow and didn’t really have any depth of character.

Overall I was extremely disappointed to find that the publisher didn’t give any trigger warnings when promoting this book. When I was expecting a wonderful Beauty and the Beast retelling, instead all I got was juvenile writing style, characters with no depth to them and a rape scene that I had no idea was coming. I would not recommend this book, it would only be a waste of your time.