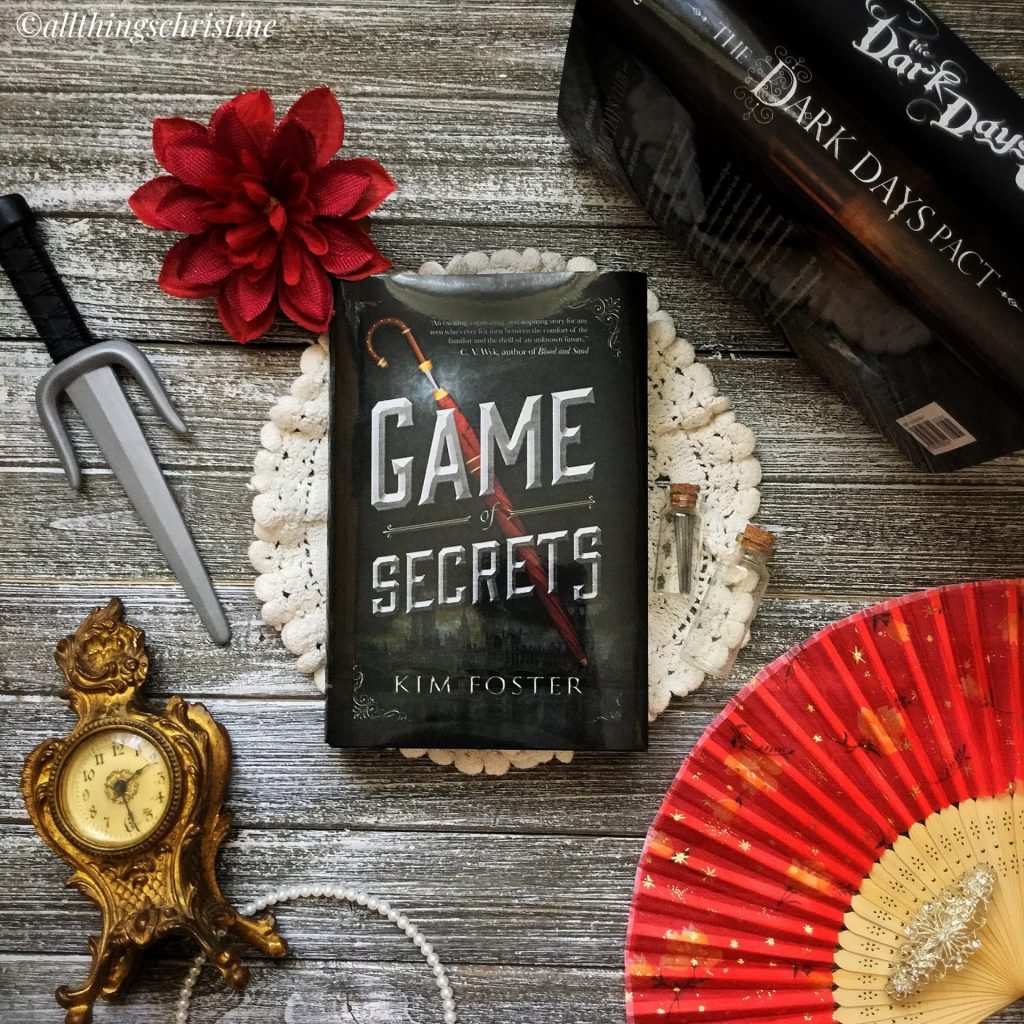 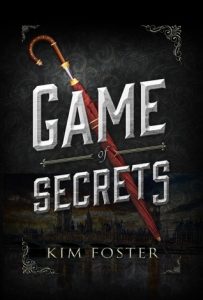 Felicity Cole sells flowers in the streets of Victorian London to feed herself and her young brother. But she has a close-guarded secret–her brother is a Tainted, born with special abilities that society fears and a shadowy organization called the Hunstsman scours the country to eliminate. When Felicity becomes the target of one of these individuals, she discovers something horrible: she’s Tainted, too.

Rescued by a mysterious gentleman on the eve of execution, she’s whisked away to a school funded by Queen Victoria, established to train selected Tainted into assassins in service of the crown.

Struggling to harness her incredible strength, speed, and agility, and despised by her classmates, all she wants is to use her new position to find a cure so she can be normal and reunited with her brother.

But with the Golden Jubilee fast approaching and the discovery that there’s a traitor in their midst, she has no choice but to embrace the one thing she’s been fighting all along.

Disclaimer: I received a copy of this book from the publisher to review. In no way have the publisher or the author influenced my review. All thoughts and opinions expressed in this review are my own. Also, this review contains SPOILERS. You have been warned.

This book definitely didn’t disappoint me which made me very happy. It doesn’t so much focus on the etiquette and such of the time period, which makes sense given as Felicity is training as a spy and assassin which would not be run of the mill in Victorian London. It reminded me a lot of The Dark Days Pact series but told from the point of view of a commoner. I would also describe this book as Buffy in the Victorian era. It was as badass, twisty, action packed and adventure filled as I wanted it to be and more.

I love Felicity so much as a character. The only thing I didn’t really understand about her character is that she didn’t really mourn for Kit. I understand that she had to move on and focus on her ever changing situation but I feel like she should’ve properly mourned him before moving on. She does feel guilt for liking Julian after what happened to Kit but if she had just dealt with her feeling that could’ve been sorted out much sooner. But other than that she was amazing! She was level headed, family focused, caring, smart, curious, daring, always does what she believes is right and had common sense. I actually think she had an advantage by being a commoner, it is easier to act noble, snobby and proud than it is to learn humility and act less than you are. And most of the missions I would imagine would entail them being out and about around commoners and interacting with them. Felicity knows that world already and if she makes a mistake with the upper crust she could explain it away as being new money. It is easier for a commoner to blend in which I think helped her in this process rather than hinder her. Now that she realizes that she no longer has any family and isn’t tied down to taking care of her brother I wonder how her character will change.

Julian is an interesting character but right now he is just a bit too shallow for me to get a full grip on him. I feel like he has secrets that he hasn’t been willing to share quite yet and I am looking forward to exploring them more. He seemed to honestly care for Felicity from the beginning but I don’t quite understand what was holding him back. If it was because they were both competitors? He could come out and say that though. Or if it is because he doesn’t trust Hawksmoor to not use it against him? I feel like that was someone they could discuss too. I don’t 100% trust Julian yet for these reasons and I look forward to exploring his character more.

Hawksmoor was a character that I kind of flipped back and forth between liking and disliking as a character. I understand as the head of a secret society that he has to have secrets. But he kept secrets that were detrimental to those within his own society. He didn’t properly inform Felicity before she joined at the Academy, he manipulated her, he didn’t tell any of the initiates about the Huntsmen having power. I wonder if now that he trusts Felicity and she is a part of the team that he will be more forthcoming with information and more helpful. Because I can’t help but feel like he knows more about Felicity and her parentage than he lets on.

I was kind of disappointed when there wasn’t more interest in why the Huntsmen want Felicity and her blood. I assume that is going to be the topic for the next book. I think it is very important that they were after her this entire time and I feel like not enough concern was expressed. It was almost like as long as she is a part of the society she is safe enough. Even knowing the Huntsmen were after her they sent her out on missions where she could be captured. Which again leads me to believe that they know more about the situation than they let on. Is she believed by the Huntsmen to be a pure blooded Atlantean descendant with powers from both of her parents? I’m looking forward to finding out more about the situation.

I was surprised to find that Julian wasn’t in the final two in the competition. It also seemed a bit odd given he’s been training for basically half his life, for him to give in to the temptation and say he is an assassin to an old school buddy. I thought it was going to be this tense final mission where you couldn’t decide who to root for: Felicity or Julian. But it turned out to be easy because Hugh is a prig and of course you want Felicity to get the position. But it just seemed incredibly out of character for Julian to act like that and I wonder if it wasn’t because of some other reason or mission.

I don’t understand how Felicity could want this position as Morgana in this society and yet she was still looking for a cure. She wouldn’t be able to be a part of the society if she no longer had her powers. And I think it is mighty presumptuous of her to decide her brother’s future for him by deciding he should get rid of his powers. Of course I suppose she just wants to give him that option should he decide that is what he wants. But they could never go back to their old lives, she is technically dead. I am glad in the end she decided to embrace her powers and join the society.

I didn’t expect Neville to be the mole in the Morgana Society. I thought that it might be Sig, but it made sense once it was all out in the open. I just don’t know how none of the Elders saw his subterfuge. I knew at that moment that with Neville gone as he most likely be by the end of the book, that that would leave another space for another agent. The final fight with Neville was kind of disappointing and anticlimactic for me too. I just felt like he would’ve put up a bigger fight, and he would’ve had back up. He had been planning this for years and it just seemed like he wouldn’t have made an oversight like that. Wouldn’t he have had his spy network in place to report to him? It just felt like the final battle went a little too easy.

I didn’t like how the story just kind of jumped over the aftermath of the Jubilee. I would’ve loved to have seen Felicity become an agent and while it doesn’t explicitly state it I assume Julian is as well. I thought Felicity was going to leave after the events at the Jubilee and I would’ve loved to have seen how and why she changed her mind. I feel that would be a big character development, and a big part to Felicity accepting and embracing her powers instead of wanting to get rid of them. And that is something I feel like should’ve been included.

Nate was the biggest surprise of all in this book I think. I had absolutely no inkling that he was just a construct of her mind and a part of her powers. Didn’t Kit see her brother though? And Kit!?! Omg that ending just killed me! Is her Kit actually Christopher Marlowe? Then who did the Huntsmen kill in the alleyway? If it is actually the founder Christopher Marlowe, he must have one of the powers that deal with time and be immortal. Will Kit show up again in the future? I have so many questions that need to be sorted out and answered!

Overall this book did not disappoint my expectations at all. It had twists and turns that I couldn’t even anticipate and it kept me guessing the entire time. I loved watching Felicity grow from a meek commoner to a Morgana Agent who is comfortable with herself and who she’s become. I can’t wait to find out more to the secret of her blood (Atlantean royalty?) and for her to get her revenge on the Duke. I am eagerly anticipating the next book in his series and I most definitely recommend you check this one out!

Book Review- Beast: A Tale of Love and Revenge
By: Lisa Jensen

Waiting on Wednesday: Not Even Bones