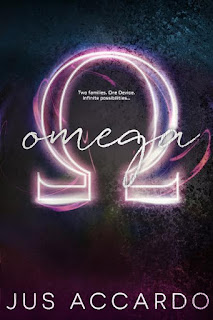 One mistake can change everything. Ashlyn Calvert finds that out the hard way when a bad decision leads to the death of her best friend, Noah Anderson.
Only Noah isn’t really gone. Thanks to his parents’ company, the Infinity Division, there is a version of him skipping from one dimension to another, set on revenge for the death of his sister, Kori. When a chance encounter brings him face-to-face with Ash, he’s determined to resist the magnetic pull he’s felt for her time and time again. Because falling for Ash puts his mission—and their lives—in danger.
But there’s more going on in Ash’s alternate universe than either of them knows: a mysterious project called Omega. A conspiracy spanning multiple Earths and revolving around none other than Ash. Its creators would do anything to keep Omega secret…

Disclaimer: I was provided an e-galley copy of this book by the publisher for review purposes. They in no way influenced my review and all opinions are my own. There are spoilers for the book in this review; you have been warned.

I loved the first book in the Infinity division series. I don’t read much science fiction and i read it to start to branch out of my niche of books and fell in love. If you haven’t read my review on the first book Infinity, you can read it here. Noah was a surprise for me in the first book, I didn’t think I would like his character but upon further reading I quickly became enamoured of him. So when I learned that the next book in this series was going to be all about him I was super excited to read it. So I had quite high expectations going into this book and while I wasn’t disappointed in any way it didn’t really exceed them either. I just felt that this book was too formulaic, like a variation on a theme. It was extremely similar to the first book; boy meets girl, they argue how they can’t be together, they try to save each other and end up going together on an adventure. It was slightly different in that Ash is part of the bigger picture and that they have very different personalities than Kori and Cade. But it just felt like to me that i had already read this story.

Since we don’t really get Noah’s point of view in the first book I was looking forward to getting to be able to dive into his character a little more in this book. I was slightly disappointed though. I always thought in the first book that Cade was the overly dramatic one and Noah was the grounded one though he has his issues as well. But Noah was certainly more dramatic in this book than I thought he would be. I was expecting more sarcasm and lightheartedness but his relationship and they way he acted in this book was actually quite dark and serious. It was also interesting to see his mind go from pure revenge for his sister to protecting Ashlyn from harm and seeing him have to make hard decisions between the two goals.
Ashlyn Calvert is a new character and Noah’s constant throughout the different dimensions. I didn’t really feel a connection to her the same way I did with Kori in the first book. I like her well enough, she’s got spunk, she’s brave, she’s smart, and she’s realistic.But I just never felt fully invested in her and while i was interested in her storyline, it wasn’t like I had to know what was going to happen to her. She is a great character though and I think she makes an interesting addition to the team. She’s also unique in that she’s from a different dimension and doesn’t know her own past. She’s central to the Omega project, and I wonder how much of what she’s forgotten in her past will be important in the future. I was also really surprised, I didn’t think they were going to get to her home dimension that fast. And I certainly didn’t think it was going to be for a quick visit like it was. I expected Cora and her team to go after Ash’s family in her home dimension and that it was going to have to be a big rescue effort by the team and that she was going to get to meet the family that she was stolen from. None of that happened though and we barely even got to see the dimension she is from.
Ava/Sera and G are also new additions towards the end of the book and I still don’t know how to feel about them. They were kind of weird and I don’t know what to make of them, are they only there for themselves or are they going to help the team? What dimension are they from and what impact will that have in the future? They remember nothing from their past so what kind of people were they? They have been through a lot already but at this point they seem to be just along for the ride and are ready to call it quits with everybody. I am excited to explore the possibilities for them while I am wary of them at the same time.
I was really disappointed that there wasn’t much Noah and Kori interaction in this book. My absolute favourite thing about the first book was the sibling dynamic between the two and I really thought I was going to get to see a lot more of it in this book but I was woefully wrong. There was a bit, but it was very much focused on Ashlyn and Kori as well as Cade were more side characters that made an appearance once in awhile. There was the scene where they were arguing about how many times Noah has landed Kori in jail in the different dimensions that made me laugh and smile and I had to settle for that. Hopefully I can see more of it in the next book of the series.
I really liked how the dimension they were in was more technologically advanced than any other they had been to, including their own. I find it slightly hard to believe that if their Infinity and Omega programs have been up and running for this long that Cade and Noah are only just running into them now. This dimension really opened up the broader story to making it more than just a revenge story and arched out to now saving the multiverse which really excites me. I do think that we’ve kind of left to the side the revenge story for now, but while it might be losing out on being the main focus it is certainly there in the background. I only hope that they can save the multiverse and get their justice with Dylan in the end.
I do not think we are quite done with this dimension, its’ Cora or the Omega program. It is quite interesting to see that an alternate dimension version of their own mother is the Big Bad. Someone they love and trust is out to get them and the ones they care about. I think this is going to be part of the bigger picture as they chase Ava and Dylan but also have to battle the Omega program across multiple dimensions. Hopefully since the team has now been brought together from different dimensions they will be able to thwart whatever issues would normally destroy them. I can’t wait to see if the Omega program does get launched, what the repercussions of it would be and how the team deals with it all while chasing Ava and Dylan.
This book, while a great addition to the Infinity Division series just didn’t quite hook me as much as the first book had. Now that the team is mostly together though it will be interesting to see how the series progresses from here on out. I would also like to thank Entangled Teen for providing me with a copy of the book.
________________________________________________________________________
Buy the book here:
Entangled Teen | Amazon | Barnes & Noble | Chapters/Indigo | ITunes | Kobo | Kindle
_________________________________________________________________ JUS ACCARDO spent her childhood reading and learning to cook. Determined to follow in her grandfather’s footsteps as a chef, she applied and was accepted to the Culinary Institute of America. But at the last minute, she realized her true path lay with fiction, not food. Jus is the bestselling author of the popular Denazen series from Entangled publishing, as well as the Darker Agency series, and the New Adult series, The Eternal Balance. A native New Yorker, she lives in the middle of nowhere with her husband, three dogs, and sometimes guard bear, Oswald.