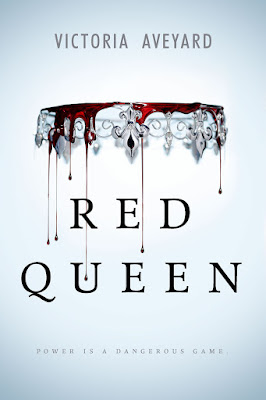 “Mare Barrow’s world is divided by blood-those with red and those with silver. Mare and her family are lowly Reds, destined to serve the Silver elite whose supernatural abilities make them nearly gods. A twist of fate leads her to the royal palace itself, where, in front of the king and all his nobles, she discovers a power of her own-an ability she didn’t know she had. Except . . . her blood is Red.

To hide this impossibility, the king forces her into the role of a lost Silver princess and betroths her to one of his own sons. As Mare is drawn further into the Silver world, she risks her new position to aid the Scarlet Guard-the leaders of a Red rebellion. Her actions put into motion a deadly and violent dance, pitting prince against prince-and Mare against her own heart.”

This book was actually a second attempt for me. It took me two tries to get though the book. I got irritated half way through the first time and stopped reading it. Touted as the next big thing and everyone is raving about it but I just wasn’t amazed by it.

To me this was not an original plot, it was good but not great compared to similar books of this genre. For example: The Hunger Games, An Ember in the Ashes, the Pellinor Trilogy, etc. One thing I did like about the plot was some of the little details that were thrown in. For example, the people in this world are not just divided by ability but by their actual biology as well; red and silver blood. I also really liked that Mare’s ability comes from within herself and not outside like the Silvers. At one point Mare says that it’s like her lightning is part of her soul and I wonder if it is.
I actually quite liked Mare as a character mostly because at least most of the time she is level headed and practical. And I love that her ability is lightning; a force of nature that cannot be tamed. Lastly, that she realizes there is a grey area and not everything is black and white or Red and Silver. But I think what I like most is that Mare chose a path and stuck to it. She was not all wishy washy like most heroines. When the Silvers were assassinated at the party she was sad but was like I chose this path and I knew it was coming and didn’t act like a crybaby.
I had a good first impression of Cal and just went down from there although he went up slightly at the end of the book. I feel he is too stiff and too put in his ways. Hopefully now that he has lost everything in Glass Sword it will change. I also liked that Cal was the one who was forced to kill the king and therefore threw all suspicion onto him and not onto the queen and Maven.
Mavey and his mother (the queen) remind me a lot of Game of Thrones with Joffrey and Cersei. He gave me a bad first impression, he was like an insolent and spoiled little princeling but it got better over the course of the book…. THEN… THEN YOU’RE THE EVIL KING NOW SO I DON’T LIKE YOU ANYMORE! I totally fell for his trap! There’s one line where Mare points out he basically made himself into the person she wanted and it was like a slap in the face for me because I realized that was completely true and I should have seen it!
I am so glad in the book that the “Big Red Reveal” (what I call revealing Mare is actually a Red and not a Silver) at the end of the book was revealed by Maven’s greed to see his older half brother and Mare punished and not by the Scarlet Guard. This was so much better! Mare took it into her own hands and made everyone see her for who she truly is and not what everyone else was wanting her and making her pretend to be. She took control of her own story and owned it! Although it irritated me a little that the title didn’t fit in with the book really. Maven would have made her into the Red Queen but she didn’t actually become one like the title would suggest.
Loved the twist that Shade isn’t dead and he’s a teleporter currently found by the Scarlet Guard. My theory for why are Shade and Mare different? My theory is that somewhere along the line a Silver and Red mixed and they a half bloods or something. But their Silver abilities/genes are recessive which would be funny since in the book the Silver bloods are all about being dominant and on top in everything.
Overall the most important line in this book if you read it is: anyone can betray anyone. This story has been done before and done better in other books in my opinion. Still, interesting characters and I will be reading the sequel The Glass Sword in the hopes it gets better. It looks like the Glass Sword is going to be all about Cal and Mare getting their revenge so I hope it is better. So in the end, 3/5 stars.

Click the link below to watch my Booktube video on it: