Book Review: The Flight of Swans By: Sarah McGuire 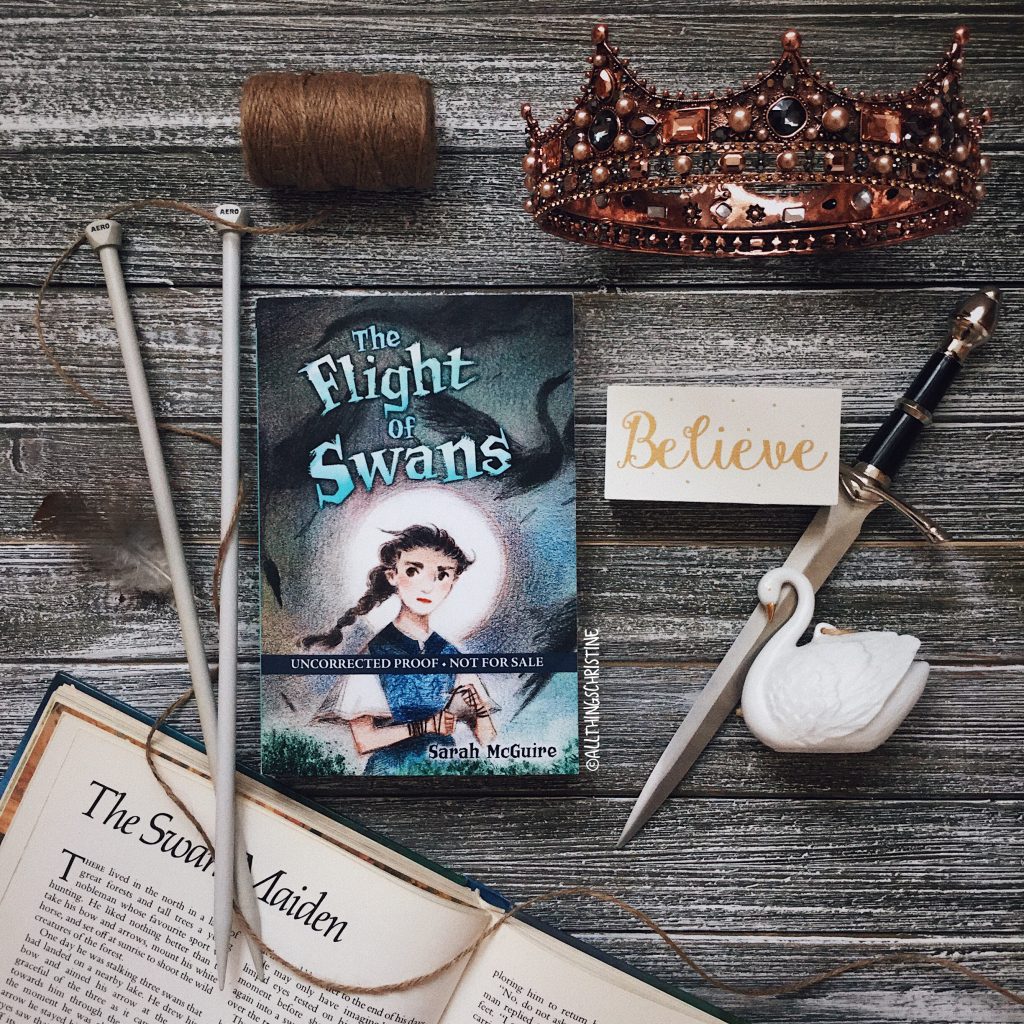 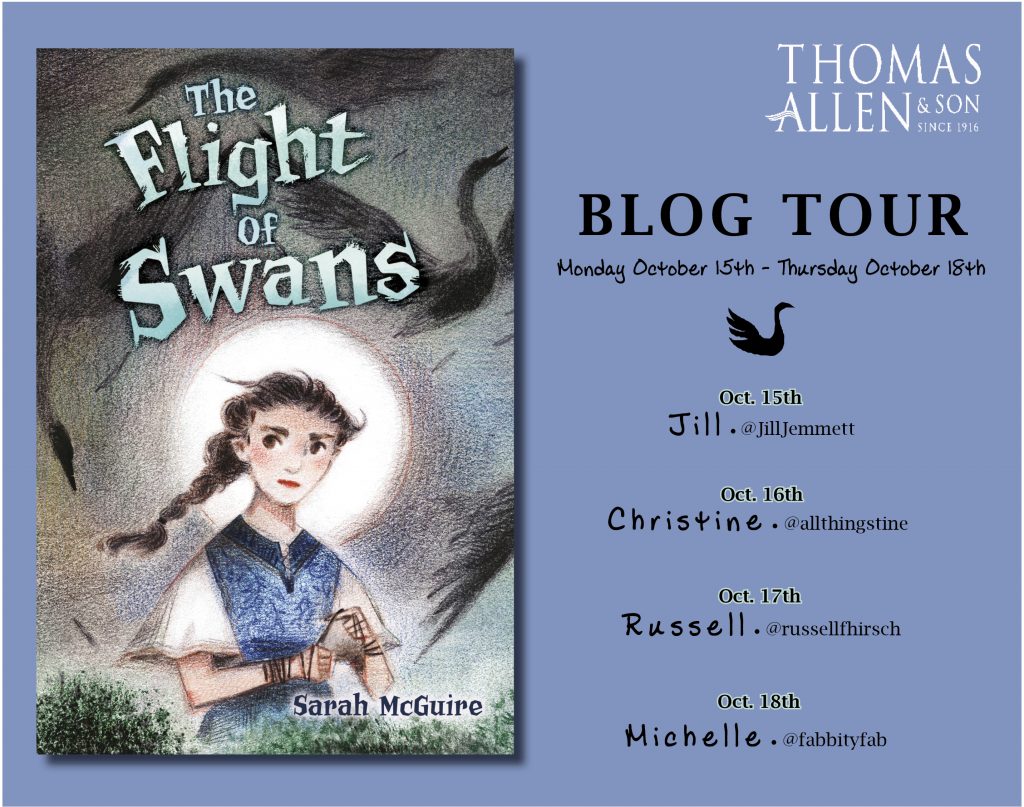 Today I have the joy of being a part of a blog tour in partnership with Thomas Allen & Son who provided me with an ARC of the book. I have always been a fan of fairytales, especially ones told by the Grimm brothers. I had already known about the tale of the Six Swans and when I heard this was going to be a middle grade retelling of the tale I knew I had to read it. So to see my review just continue on with the post below! 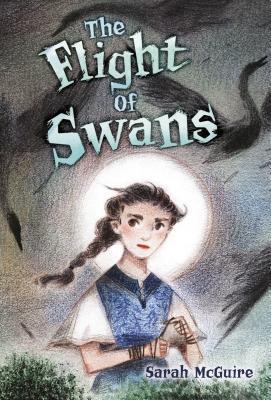 Based on the Brothers Grimm’s fairy tale Six Swans, The Flight of Swans follows Ryn’s journey to save her family and their kingdom.

Princess Andaryn’s six older brothers have always been her protectors-until her father takes a new Queen, a frightening, mysterious woman who enchants the men in the royal family. When Ryn’s attempt to break the enchantment fails, she makes a bargain: the Queen will spare her brothers’ lives if Ryn remains silent for six years.

Disclaimer: I received this ARC from the publisher to review. In no way has the publisher nor the author influenced or paid for my review, all opinions stated are my own.

I have not enjoyed a retelling this much in a long time. I realized going in to this that it was a middle grade book, but I must admit that I completely forgot about that as I was reading the story. To be completely honest I’m not 100% sure if I would call this completely middle grade fiction. I feel like it could be the upper age range of middle grade or in some space between middle grade and young adult. If you are buying this book for your child to read I would recommend they be at least 11 due to character death (not really super graphic, but it didn’t really fade to black) and romance (there is some kissing).

I would say that going into this book you would need to know at least the basics of the Six Swans tale to really be able to understand the story to its’ full extent. Because I had this prior knowledge I was alright but if you had no idea what it was about then I feel like this book could be a little bit confusing. To me, this retelling not only built upon the original but made it accessible and easy to understand and feel like you were really a part of the story. It built upon the original story and McGuire added her own flair which I personally loved.

Also, another small touch I really appreciated was the chapter headers. There are swan wings for the parts of the story where her brothers are swans and a full moon for the chapters where they are human again. For me these little touches really make the story and make me love it that much more.

The world building and pacing for this book was phenomenal. The worlds felt like real places to me that I would personally love to explore. I definitely got some Scottish and Ancient Roman feels to the worlds of Lacharra and Eyre. I was worried about the pacing for this book because I didn’t know how McGuire would manage to handle covering 6 years in a single book. She does it so magnificently though! The story never fell off in pace, something was always happening and the story was always progressing. We did lose big chunks of time at once but that is to be expected though because they book is already 437 pages long and really couldn’t be any longer. I never got bored with the story or wanted to stop, in fact I read this book in a single sitting! I was sad when I realized how close to the end I was because it felt like I got there so fast.

The only thing I feel like it was missing was a map so we could see and travel with the characters as they went on their journey throughout the book. I am slightly biased though when it comes to book maps because I adore them. But I also would’ve loved a pronunciation key for the names in the book because I didn’t know how to say some of them and I am sure that in my head I said a bunch of them wrong. I can imagine it would be much harder for middle grade readers to pronounce them.

I loved all of the characters in this book. Andaryn was a delight and I loved to see the dynamic between her and her brothers. I was so sad when Tanwen died! But my favourite part was watching Ryn grow up and her character development over the six years in silence throughout the book. There were no big leaps and bounds (except for her dealing with Tanwen’s death) but it was a slow and quiet development over time as she went from a spoiled princess to a young woman who knows her own mind and who she is and what she wants. Andaryn was a principled, courageous, tenacious, generous and truly lovable character that made me sympathize with her and root for her to win.

Her brothers were endearing, protective, and a joy to read about. Each brother had their own distinct personality that really made them stand out and not fade into the background even though they spent most of the story as swans. And how could you not fall in love with Corbin! He was so smart, understanding, courageous and most importantly for me, he allowed Ryn to save herself on multiple occasions and not dash in like a knight in shining armour. I actually would’ve like a little bit of the book to be from his perspective because I would like to understand his character a bit better.

I also loved the underlying theme in the book about the power of words. With the loss of her voice and words altogether Ryn realized how incapacitated one could be and manages to find a way around it. She finds a way to speak without words which was truly amazing to me. I actually tried for just an hour to not make a single noise and it was impossible. You make noise when you yawn, cough, laugh, you speak without thinking, you hum, etc. You don’t even realize how hard it is until you actually try it. To me this makes words and the power of them even more important. Words have the power to hurt people, to raise them up, to become poison or medicine and this story just reinforced that. As a reader and blogger I always knew words were important and this book just does really well demonstrating how.

There was really nothing that I disliked about this book except for the fact that I never wanted it to end. I did want to see an epilogue of a few years later with Ryn back with Corbin and maybe with kids of their own and a bigger Carrick with the two countries enjoying peace and harmony. That is how I imagine it would all turn out anyways, but I still would’ve loved to see it in the book. A girl can hope for a novella though right?

Overall I truly adored this book and I would definitely recommend people of all ages to read it. It is a wonderfully imaginative and compelling retelling of the Six Swans tale that does justice to the original story. I’m so sad that the story is over because I would’ve loved to see another book set in this universe. This is the first work by author Sarah McGuire that I’ve read but I am definitely going to read more of her books in the future! I would like to thank Thomas Allen & Son for provided me this ARC copy to read, I’m so delighted that I did! Now go out and get your copy now.