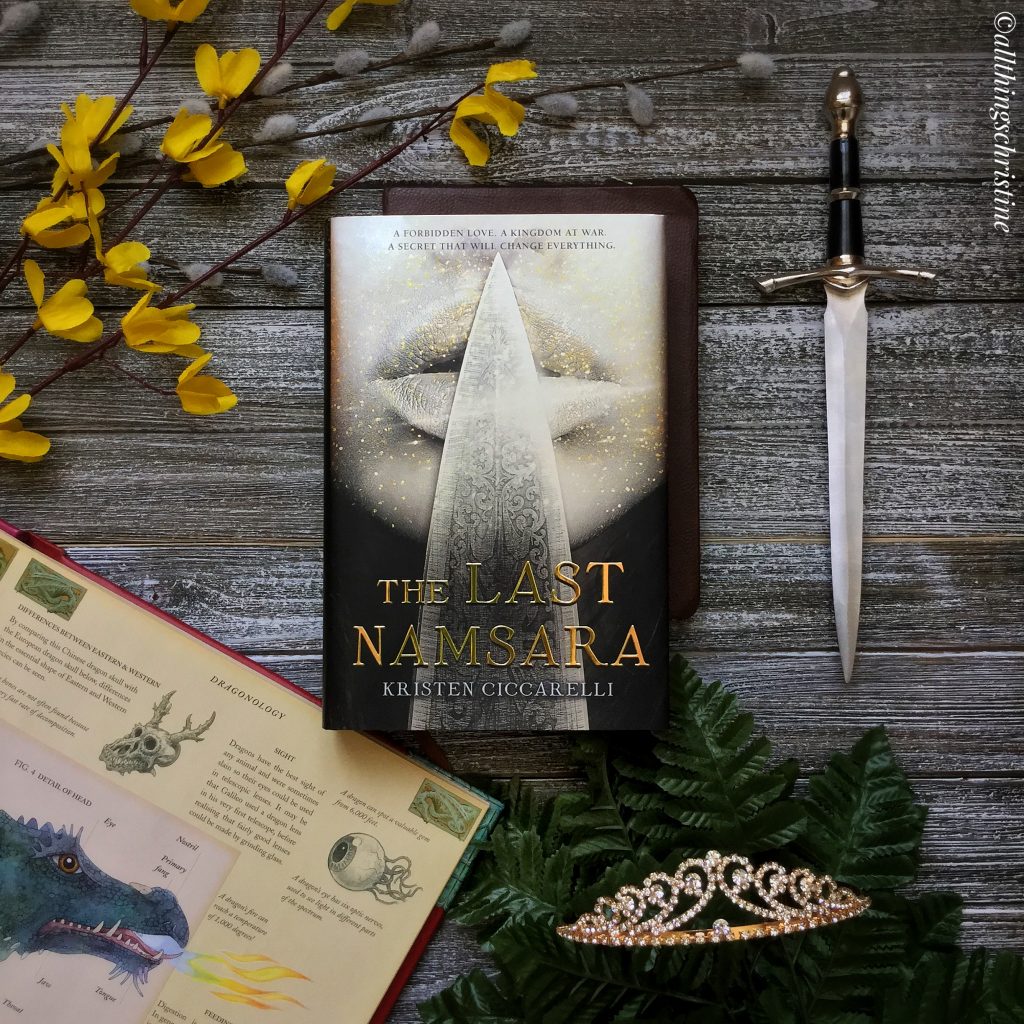 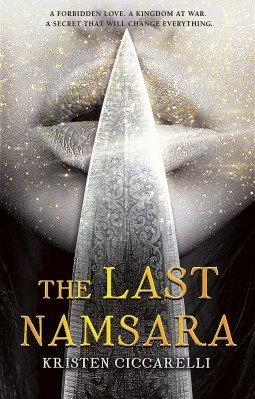 In the beginning, there was the Namsara: the child of sky and spirit, who carried love and laughter wherever he went. But where there is light, there must be darkness—and so there was also the Iskari. The child of blood and moonlight. The destroyer. The death-bringer.

These are the legends that Asha, daughter of the king of Firgaard, has grown up learning in hushed whispers, drawn to the forbidden figures of the past. But it isn’t until she becomes the fiercest, most feared dragon slayer in the land that she takes on the role of the next Iskari—a lonely destiny that leaves her feeling more like a weapon than a girl.

Asha conquers each dragon and brings its head to the king, but no kill can free her from the shackles that await at home: her betrothal to the cruel commandant, a man who holds the truth about her nature in his palm.

When she’s offered the chance to gain her freedom in exchange for the life of the most powerful dragon in Firgaard, she finds that there may be more truth to the ancient stories than she ever could have expected. With the help of a secret friend—a slave boy from her betrothed’s household—Asha must shed the layers of her Iskari bondage and open her heart to love, light, and a truth that has been kept from her.

This book was such a slow burn it was agonizingly delicious. I was impatient for the story as well as Asha’s and Torwin’s relationship to progress but at the same time I never wanted it to end. The flow of the book is pretty fast, there is always something happening but it also feels like it is moving at glacial speed. This is the first book where I have actually liked and appreciated how long it took these characters to accomplish something because we had to see their character development happen before they could start to exact some change in the storyline.

I loved the stories that explain the past, explain the history of his world. It was like getting little insights into unspoken part of this world. It was especially precious because of the importance that stories play into this fantasy world. Stories are forbidden because they corrupt souls and destroy people so it was like I was sharing a secret with the book. The role stories play and the power they contain is a recurring theme in this book which I thoroughly appreciated. When we start the book stories are for Asha to use to lure dragons, they are this destructive force that corrupt and kill people (her mother included). As Asha changes and begins to question her surroundings and long held beliefs she realizes that stories are not evil, but people are and the power they hold is merely the knowledge that are contained within them. I’ve personally always thought stories have immense power to change people after reading them and I am glad to see this in a book for the first time.

I feel like Asha was the only character that was truly fleshed out in this book and I wanted to know more about the other characters, her twin brother, Roa, Safire, Torwin, etc. I know that this book’s main character is Asha, but the side characters felt a little lacking because they weren’t explored enough characterwise and storywise as Asha was. Maybe this will change in the sequel but based on how the book ended I don’t know if it can.

The only thing I disliked about Asha is the fact that she is so small minded for lack of a better word. She blindly believes and thinks it is right to believe in the old ways and everything that has come before. Asha doesn’t question the world around her and the right or wrong of it unless it affects her directly. She is quite selfish in that regard, at least at the beginning of her story. It is wonderful to watch her change as she grows to care about a certain few. She turns from a selfish girl who never questions her father to one who loves the beasts she once slaughtered, a slave who she thought was beneath her, and questions everyone and everything.

You also get to understand how she became the person she was; that she was raised that way specifically by her father to make her easier to control. She was so focused on her supposed guilt for what she did to her people and trying to right that wrong that she willingly believes in everything her father tells her to do (since he was the only one not to shun her or be afraid of her). She thinks and believes her father is correct in everything so she blindly follows him which is why she grew up the way she did. The changes that she made to herself were small and took time which is very realistic. Very rarely do people do an about face overnight, it is slowly and gradually which is how it is depicted in the book. So while I liked how badass Asha was at the beginning, I much preferred the person she became by the end.

I knew Asha was going to turn out to be the Namsara cause it is literally in the title. I know she is supposed to be Iskari, and at one point I thought Roa or Safire might turn out to be the Namsara but I realized it when Asha was given the dragon. It is also ironic for her people that the person who they thought brought destruction actually was chosen to be their saviour. I don’t think Asha was ever the Iskari or the Namsara, I think she is a combination of both; she is both destroyer and saviour. I was so sad that after everything Asha had sacrificed for her own people, they still feared her and hated her. The people are ignorant of how far the Dragon King and his mother deceived them but I do hope one day Asha can be received happily and not like seeing her is a curse. I would love to see how she reacts to it and I am hoping to see it in the sequel since it is now known that she is the Namsara.

Torwin was an interesting character and I found that he kind of reminded me of Finnick from The Hunger Games. I really wanted his character to be explored more. I want to know more of his history and his backstory because I feel like there is more to it. Why was he out of all of the slaves in the castle chosen to be a part of the uprising? How did he know how to play an instrument? He was too knowledgeable, too outspoken, too strategic and good with a bow to be just a common slave. There had to be more of a reason why Torwin wanted to escape the kingdom to the West. I really liked Torwin as a character because he was very upfront, honest, caring, brave, level headed and at times endearingly arrogant. I feel like his character has a lot of unexplored potential that will hopefully come out more in the second book. Also, this is kind of insignificant but on page 331 Torwin’s name changes to Torwyn? A missed old version of the name that was changed? It is kind of odd but it stuck out to me and I would like to know why. Personally I like the spelling of Torwyn better.

I never suspected her father was the true villain of the book. I was so surprised to find him truly heartless and willing to sell out both of his children. That he was a greedy power monger. I kind of knew something was up with him but I never expected him to be as horrible, greedy and evil as he turned out to be. After I found out though I knew the Dragon King was going to die and I knew Asha was going to kill him. She would’ve killed her father to save her brother or Safire from having to do it and face the death penalty. Let alone how he manipulated and deceived her and destroyed her life. If she wanted Dax to rule, Safire to live, then it had to be her. It was also a surprise to find that this wasn’t just her father but also possibly her grandmother who committed seriously grievous acts as well. It just goes to show that the victors truly get to write history.

There were a couple things in this book that made me angry. The first Namsara pissed me off a bit; I hated how he talked in riddle and basically gave Asha no choice. He didn’t grow on me either the more we saw him too. Finding out a bit more of his past did make him a bit more human. I hated how he knew exactly what and how much he was asking of Asha and expected her to do it anyways. And how he told her with a grin the entire time! I just got more and more frustrated the more she interacted with him. That was nothing compared to what I am going to talk about next though. I AM SO ANGRY THAT SHADOW IS DEAD! I know he turned out to be more Towin’s dragon than Asha’s but I thought that they were supposed to portect Shadow so he was safe. HE WAS JUST A BABY! All that means is that her dragon (Kozu) is now a little cinnamon roll that must be guarded at all costs. While I was angry about Shadow it was soothed a bit by reading about Safire killing Jarek. He most certainly deserved it, but I didn’t think he would go down that easily. It was almost like his death was an afterthought after the King had died. That the author was merely tying up loose ends. i will forgive all that though because I wanted to see that jerk gone.

I thought the book was going to end on a cliffhanger but it ended quite nicely. I’m almost worried at how well it ended… As readers we have all learned that happiness in the first book is fleeting and won’t last long. (Yes, I may be a bit wounded from other books but at this point it is just self preservation). I don’t quite know where the story is going to go from here because there is so much possibility. Asha is the Namsara and it is her job to stitch the world back together, but how is she going to do that? Especially with her brother’s men after her and I am assuming there will be a price on her head. There are so many questions that I need answered and so many more kisses that I need to read!

So overall I really liked this book and I will definitely be picking up The Caged Queen when it come out. I can’t wait to see where the story goes and if the theories I have are correct. If you love YA fantasy, magic, dragons, stories and a badass female character then you definitely have to check out this book.