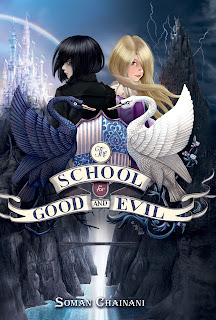 With her glass slippers and devotion to good deeds, Sophie knows she’ll earn top marks at the School for Good and join the ranks of past students like Cinderella, Rapunzel, and Snow White. Meanwhile, Agatha, with her shapeless black frocks and wicked black cat, seems a natural fit for the villains in the School for Evil.

The two girls soon find their fortunes reversed—Sophie’s dumped in the School for Evil, while Agatha finds herself in the School for Good. But what if the mistake is actually the first clue to discovering who Sophie and Agatha really are?

This was an amazing, magical, epic, mind bending, adventure of a book. If I had to create a tagline for it, I would say it is like Once Upon a Time for middle graders. Although there was a couple things that surprised me considering this is labelled a middle grade book. First was the length of the book; it is almost 500 pages! This seems a bit long for the average middle grade book, but I was perfectly alright with it. Second, was just how dark this book actually was. For a middle grade novel there was quite a bit of killing, murder and just all around darkness.

Let’s start with the cover for this book. In case you can’t tell I really have a thing for a beautiful cover. And the cover for this book doesn’t disappoint! It really gives you a glimpse into this world of fairytales and just how different the two Schools really are. The bridge connecting the two Schools under the title, shows the divide between Good and Evil as well as Sophie and Agatha, Or at least, that’s what I like to think. I also really liked the illustrations in the novel, it really added to the story. Most of the time our imaginations have to dream up the people, places, and objects of the world we are introduced to in books, but the illustrations help us along in that front which I really appreciated. Especially since there is some pretty intricate world building going on in this novel.

The plot was not quite original in that it brought the protagonists into the fairytale world from the normal world, but what was original was that you have the “good girl” sorted into the School for Evil and the “evil girl” sorted into the School for Good. Although I could tell right from the beginning why Sophie belonged in Evil and Agatha belonged in Good. While Sophie only concentrated on being pretty, getting her prince, and getting into the school she thought she was destined for; Agatha was focused on helping Sophie, and getting them both back home. Even though Sophie abandons her and betrays her multiple times, Agatha forgives her and still helps her until she realizes Sophie never wants to go back home like Agatha does.

I knew from almost the beginning of the book that the School Master was the Evil twin, mainly because everyone thought he was the Good twin. I was thoroughly creeped out though by how the School Master who is an old man (even though he had a young face) wanted his true love to be a student and a child. And although it turned out to be a wrong theory, I though Professor Slader was the Good twin who had lost the fight. I was surprised to find out that the Good twin had actually been killed, but possessed Slader’s body to help. It was sad to see Professor Slader die in the end though, since he was my favourite adult character in the book. I was quite annoyed with all of the adult figures in the book. Why didn’t the teachers of each school just sit the girls down at the beginning and tell them they were sorted into the school they were supposed to be in? The girls waste so much time trying to change schools because none of the adults set them straight.

Sophie was the character who annoyed me most at first, but only in certain ways. It’s not like she isn’t hardworking. She sure put a lot into her beauty regimen, especially when they were in Galvadon. And it isn’t like she’s not ambitious, cause she had the goal of being taken by the School Master and did all in her power to make sure it happened. Those qualities I could admire in Sophie. But once she got to the fairytale world it was like she expected everything to be just handed to her. She thought she belonged in the School for Good, and that someone would just come bring her to the School if she said it enough. Also her mindset of if I’m pretty, I will end up with my prince. She put all this effort into making herself beautiful, but not into making a relationship with the boy she is supposedly in love with. I also really disliked how Sophie thought of Agatha as more of her henchman than a friend. Sophie is very selfish and when she finally realized she’s not going to get what she wants she claims Agatha stole everything from her when nothing was really hers to begin with. I can empathize with Sophie though since I am a romantic at heart, and I want my Happily Ever After too. All she wants is to be happy with her one true love, which she has a really hard time accepting may not come true for her. The last thing that annoyed me not only about Sophie but about almost all of the characters in the book was when after the Circus, Sophie loses it and she kills all of the wolves and faeries. And afterwards everyone basically just forgives her and says you’re still Good. She may still have some Good in her but after killing all of those innocent past students she certainly has Evil in her too. No one even thinks to mention it later either.

Agatha on the other hand I liked a lot more but I still had my problems with her too. Agatha at the beginning is such a downer. I know she’s in a new world and she’s uncomfortable but she was on an adventure! Why not make the most of it? Agatha does learn eventually and starts to learn both Good and Evil studies which I’m sure will help her in the future. The other thing is that because Agatha considers herself inferior, she let Sophie take the lead and mistreat her all the time. Not only that but she always come back for more until Sophie completely betrays Agatha’s wish and dream of going home. Agatha does make a comeback though by realizing her own self worth and  standing up for herself. I think my favourite line of Agatha’s is when the Evers turn into Evil and Agatha says “being Good is not being pretty, but having Valor and Honor.” To me, Agatha embodies those sentiments as does Sophie somewhat when she saves Agatha’s life at the end of the book.

I really appreciated at the end where Sophie said “who needs princes in our fairy tale?” I would be really happy if this turned out to be more of a modern fairytale where Sophie and Agatha ended up together. I really like the two of the, together and I think they make a good couple. They support each other while at the same time push each other to grow as people. It was Agatha’s true love’s kiss that saved the dying Sophie and woke her back up as opposed to Tedros. The prince Tedros actually annoyed me as a character, the more we got to see him in the book. At times he seems to be trying to do the Good thing, but others he just lets his emotions instead of reason reign. He seemed less like the fairytale prince he was supposed to be and more like the vapid, shallow rest of the crowd that the Evers had become.
I adored how no one in the book is truly just Good or Evil, that we all are a mixture of both. I also thought it was an ingenious twist in the story to have Sophie turn the Nevers into Good and the Evers into Evil. This showed all of the children who thought they could only be one or the other that they are capable of both. I loved how it was the two “Readers” who changed fairytale land and all of the children at the two schools. They changed how the kids view themselves and others.
I loved the cliffhanger ending of our two main characters being thrown back to their home in Beyond the Woods. Has their fairytale ended and the Storian moved on to another? Is the next book going to be about the girls making their way back to school? And what about the aftermath? There’s not two separate schools anymore, and if no one looks Evil (gross) and Good (beautiful), does that mean everyone is average looking now?

Overall this book is a magical coming of age story about finding who we really are, set in lushly built world where characters strive to break free of their destined roles. I definitely recommend this book to everyone to read because there is something for everyone to take away from this book. A well deserved 5 out of 5 stars. I look forward to reading the other two books in this trilogy.

P.S. Don’t forget to check out the amazing website where you can set up an account, be sorted into the School for Good or Evil and go on wonderful adventures with others!
www.schoolforgoodandevil.com

I was sorted into the School for Good: 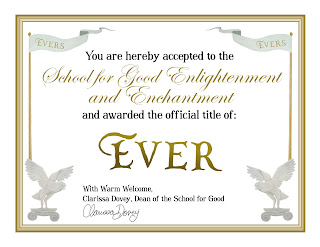 Hope to see you there!

Cover Reveal: The Dragons of Nova By: Elise Kova