Book Review: The Wrath and the Dawn By: Renée Ahdieh 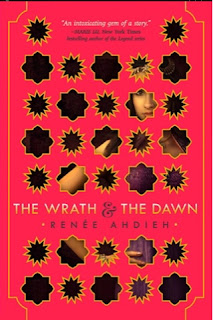 “Every dawn brings horror to a different family in a land ruled by a killer. Khalid, the eighteen-year-old Caliph of Khorasan, takes a new bride each night only to have her executed at sunrise. So it is a suspicious surprise when sixteen-year-old Shahrzad volunteers to marry Khalid.  Shazi’s wit and will, indeed, get her through to the dawn that no others have seen, but with a catch . . . she’s falling in love with the very boy who killed her dearest friend. She discovers that the murderous boy-king is not all that he seems and neither are the deaths of so many girls. Shazi is determined to uncover the reason for the murders and to break the cycle once and for all.”

This was my first book of 2016 and I am happy to report that it was an amazing one! The Wrath and the Dawn is the debut book from first time author Renée Ahdieh. It is a fairytale inspired book based on the tale 1001 nights. Truth be told, I haven’t read the original fairytale so I’m sure I missed some minor details but you do not have to read the original fairytale before reading this book.
First I want to talk about the cover of this book. The dust jacket cover, the spine of the hardcover, the picture on the front endpapers and the map in my opinion all make it worth buying for those reasons alone. I personally love maps and whenever there is a map inside the book it makes me just a little bit more excited to read the book and I am constantly flipping back to the map when places are mentioned. You can see the map pictured below. What I found particularly interesting was the fact that the world we come to know in the book is only half of the map. Are we going to discover new places on the map in the future? I can’t wait to see! The picture on the right below is the picture on the front endpapers. If you look closely this picture is the same picture on the cover of Shazi, but it is what you see behind the screen. And the gold embossing on the spine, especially the cut outs of the screen from the book cover! These extra touches show the thought and care that was put into the presentation of this book. Also, not just by the author because the author actually doesn’t get too much of a say when it comes to how their book looks in most cases. I’m especially impressed with this book though. 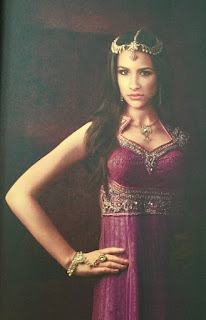 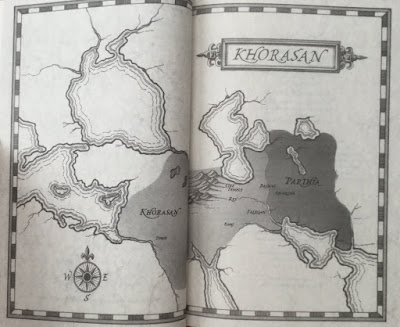 Shazi was a particularly favourite character of mine. She is a courageous character with fire in her soul, yet she is not afraid to be a character of contradictions. For example she is fierce yet tenderhearted, an imaginative romantic yet a stark pragmatist. Many times in the book she is said to be a great beauty but she only uses her beauty as a weapon and would much rather use her brain than her beauty. I loved seeing her become more than a vessel for revenge and see her change “sides” so to speak as she learned that not all was what it seems. Shazi is a strong and proud female character who didn’t deny the truth of what was happening or happened except for in the case of Khalid’s role in her best friends death. The relationship between her and Khalid took on a two steps forward, one step back characteristic that kept me on the edge of my seat and wanting more. I also appreciated that while they may have admitted to themselves that there was an attraction, they wouldn’t admit it to each other. In many young adult love triangles the love, it is denied, denied and denied again and this was a refreshing change.
Khalid who is the “monster” Caliph, the King of Kings in the story. I understand that this is a fairytale inspired book, but the constant references to the beauty and the beast which kept getting thrown in our faces was a bit much for me. Although it was wondrous to see the beast become the hero in the story. I was very interested in the fact that the reader only learned why he was the way he was as slowly as Shazi did. We learned as she did and we got to feel the way she felt. I really became attached to the two main characters and wanted them to succeed as we got to see who they are as people. Watching Khalid be drawn out of his shell by Shazi and Jalal also happened to be immensely entertaining.
Tariq is the second lead and the childhood love of Shazi. Tariq as a character annoyed me from the start really. It felt to me that Tariq saw Shazi as more of a belonging than Khalid ever did. I thought Omar really hit the nail on the head when he said that Tariq was mistaking love as wanting ownership over her and wanting to be the only one in her eyes. I do think that he does love her, but it is not the driving force behind him. I was intrigued in Tariq’s descent into darkness and how he went from hero to monster all in the name of love while Khalid went from monster to hero.
Jalal is an interesting character and I can’t quite discern his motives. For example, when he went to get the pregnant Despina but then found Shazi and company in the stables? How could he have done both so fast? Does he want to help or to hinder?
I was happy to see that all this started over getting revenge for her best friend and in the path of her revenge Shazi found a new best friend in Despina. She has a womanly refuge in the face of all the men she has to deal with.
I thought that the stories that Shazi told Khalid every night were going to be more centre stage and I was disappointed that they weren’t. Although I did like how Shazi used her stories to lure him in, and she also uses them as teaching tools to teach Khalid a lesson when she wants to. Also, the role magic seemed to play in the book was introduced and made me think it was going to be more important but it seemed more like an afterthought that was just put in.

For me, finally finding out the details of the curse were a bit of a letdown. I had pretty much figured out the main strokes of the curse before it was revealed, i was just missing some of the finer details. But the letdown upon finding out about it matched the way Shazi felt upon finding out so in that way it isn’t really a letdown because it lets you connect on another level with Shazi.

Overall this book causes a roller-coaster of emotions for the reader on behalf of the characters located in an exotic, lush rich landscape of a world. Did Shazi and Khalid cause the downfall because Khalid didn’t have her killed? It seemed to me that Shazi’s family would have stayed the same course even if she had died. Instead of a rescue it would be revenge though. So it seems like Khalid isn’t really cursed or the curse didn’t take effect because it was Shazi that caused the downfall. Or is it the curse because her death would have taken the wind out of the sails so to say of her family trying to rescue her. It is delightfully confusing and I think it is meant to be.

I will definitely be reading The Rose and the Dagger, the second book which comes out May 3, 2016. Where will we go from here? A missing Calipha after the destruction of the castle and the city? Will she be blamed for it and Khalid redeemed after helping his subjects rebuild the city? There is much to learn and I’m looking forward to May 3!