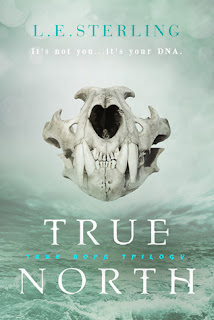 Abandoned by her family in Plague-ridden Dominion City, eighteen-year-old Lucy Fox has no choice but to rely upon the kindness of the True Borns, a renegade group of genetically enhanced humans, to save her twin sister, Margot. But Nolan Storm, their mysterious leader, has his own agenda. When Storm backtracks on his promise to rescue Margot, Lucy takes her fate into her own hands and sets off for Russia with her True Born bodyguard and maybe-something-more, the lethal yet beautiful Jared Price. In Russia, there’s been whispered rumors of Plague Cure.
While Lucy fights her magnetic attraction to Jared, anxious that his loyalty to Storm will hurt her chances of finding her sister, they quickly discover that not all is as it appears…and discovering the secrets contained in the Fox sisters’ blood before they wind up dead is just the beginning.

Disclaimer: This book was provided to me by the publisher in exchange for an honest review. Neither the author or the publisher have influenced the review in any way and all opinions are my own.

The pacing for this book wasn’t my favourite. The beginning was much too slow and even though there was the mystery of trying to figure out what Storm is up to it had me itching to just get onto whatever was coming next. Once Lucy made the decision and followed through on it to save Margot it got a lot better. I felt as stifled as Lucy in the first half and wishing that we could just move on from the politics and get to the bigger picture.

I kind of love that there is a marked difference between the girls’ at the beginning of the first book and the ending of the second. I don’t like what they went through but you can definitely see their loss of innocence and how the situations they have lived through as well as how the world they live in has changed them as they become aware of the world outside of their influence.It really shows the character development in them both. I sometimes forget that the girls are still only teenagers since they really don’t act like it, nor does the world they exist in let them act that way.

I got really angry at Jared again in this book with the hot and cold attitude. He only slightly redeemed himself when he explained how he didn’t want to push Lucy into something that would essentially shackle her for life. And she isn’t even sure if that is what she wants although if the end of the book is any indication I think she is going to say yes. But I just feel like he is leading her on, since he has his loyalty to Storm, he isn’t intending to have a committed relationship with her and yet he won’t really let her move on either. I found it controlling of him and frustrating that Lucy lets him treat her like that. I thought that in the second book when he decided to help Lucy find Margot and disobey Storm that he would fully commit himself to her and I was really sad when I saw that that wasn’t going to happen.

I still don’t like Nolan Storm. I think he is exactly like the girls’ father but he puts a nicer face on it. He says he is their guardian but like Lucy says, really the girls have only exchanged one prison for another. It really bothered me that Storm said that the girls have no choice in whether they want him to be their guardian or not. I’m also really interested in the fact that at the end of the book he wants them to go back to school. What is his angle there? I am also very worried that now that the girls are back together and under Storm’s control. I feel like now that Lucy’s weakness (Margot) is back in the equation, it will be much easier to control her and bend her to his will. I can’t wait to see where the dynamic goes in the third book and how Lucy and Storm finally come to a head.

I’m interested in finding out exactly who Alastair is. I do think he is some kind of True Born, but I’m not quite sure what kind. It obvious that he has some powers and influence since he is in Dominion and yet has friends on the European continent. At first I thought he was part of the Gilt but since he was clueless when we met a member I’m starting to think differently. I’m kind of frustrated that I haven’t figured out who he is yet and I can’t wait to find out in the next book.

It was really interesting to hear about the Gilt. It is hard to imagine a world outside of the Upper Circle, but it looks like the Gilt is it. I think the merc Marcus is going to become a friend of Lucy later on. He did say he was going back to Dominion and he is rich enough to be a member of the Gilt now. I hope he becomes someone Lucy can rely on apart from Storm. Storm is supposed to be richer than anyone in Dominion, so is he a member of the Gilt as well? I feel like he isn’t since he then wouldn’t need the girls to get into the Upper Circle parties. It is no wonder that people see the twins as the prophetic ones. It sounds like the both of them literally have the cure to the Plague in their blood which their parents and Resnikov want to make a profit off of. I do think Margot is right and that their parents really are going to come back for their investment. I’m only wondering how since they’ve lost their backer.  And where are their parents now if they weren’t with Margot? I’m sure we will find out what they were up to in the next book.

I’m now interested in what exactly the girls’ blood is. What did they do to it? If they were Spliced in the embryo then why didn’t they just become Splicers? How is it that doing something to their DNA in embryo makes their blood affect the Plague? I can’t believe that we haven’t got more answers by this point in time but that just makes me more excited to find them out later. I’m sure I am as frustrated as the girls are that we don’t have answers. Who is bankrolling the Lasters and the preachers that their reach stretches over continents? It must be like Lucy thought and a member of the Upper Circle or the Gilt must be helping them out. They are the only ones who could afford to do so. But why would they bankroll them? What do they get out of it? Is it so they can stay in the shadows? Why not use their influence and go directly to the source instead of indirectly through the preachers? I have so many questions that need to be answered! I don’t think Resnikov is dead. I do think that he really is in love with Margot which is really gross, since she is still a teenager and it isn’t like she is a willing participant in the relationship. I think Resnikov is going to show up later on in another book and I’m sure he is going to be super angry with the girls since they blew up his baby factory and lost his love. That baby factory was disgusting though, especially since it didn’t really surprise me all that much based on the world these girls live in. It did bring up some interesting things though. I think their own parents planned the attack on Margot, but for what end? They could have just taken them in instead of planning it. Maybe it was Resnikov then? But why the impatience? He could’ve just waited since their parents were willing to sell Margot off to Resnikov anyways. Also they have obviously been using some kind of DNA replication to create clones of Resnikov which I’m sure the brother/cousin of Resnikov who died in the first book was. Everything is so entangled, I’m looking forward to unentangling some of the mystery around the girls and see them really take control of their own futures.

Overall while I have some small problems with this book and the series I am enjoying it and I am looking forward to diving back into the world when the next book comes out. I am particualrly enjoying this different take on DNA and the science behind it. I think this series is an interesting take on the dystopian and I just want to know more and more and see what is possible inside this world. I hate having so few answers to even the most basic questions but it just makes me eager to read more so I can finally get them. It is a really good science fiction book for someone like me who doesn’t read too much of the genre, but I definitely recommend you pick it up for the swoony romance. If you haven’t started this series already, go out and pick it up now!
_____________________________________________________________________