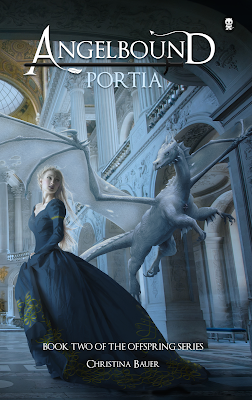 “Unlike her famous older brother Maxon, Princess Portia isn’t known for killing demons or attracting admirers. The reason why is simple: a spell was cast on Portia, and the magic has marked her to one day transform into a dreaded Void demon. To fight this horrible fate, Portia’s spent her life hiding in libraries and learning magic. But when the Void demons threaten to destroy all the after-realms—and the handsome dragon Emperor Tempest offers his help—then Portia suspects that her future holds more than just a demonic metamorphosis. Fate is calling the bookworm princess onto the battlefield, and it’s a fight against both deadly enemies and her heart’s desires. May be read as a stand-alone.”

This is the second book in the Angelbound Offspring series. I haven’t read any of the other books in this series or in this world. This doesn’t mean that I wasn’t able to read the book, but I’m sure I missed some of the nuances. The publisher says it can be read as a stand alone though, which is true but it can be a little confusing at times.

I loved the plot; I felt like the plot was very well done and has so much potential. I just feel like its full potential wasn’t reached. The world was very well constructed and interesting; I would love to explore it more in other books and the various peoples that populate it.

Portia was my favourite character! As a bibliophile, I have to love a fellow book lover. I appreciated how she used her brain in tough situations, but not how she always relied on Tempest to help get her out of those situations. It seemed like she was always the damsel in distress who needed a man to help her, but at least he didn’t just always rescue her and they fixed the problems together. I liked how Portia became more decisive, and more confident in herself as she started to solve each quest and realize her own potential.

I feel like Tempest’s character wasn’t thoroughly explored enough in this book. For all that Tempest was tortured by his father for years and is emotionally damaged, it didn’t really show that much in the book. This is kind of where I wonder if it was more explored in the other book in the Offsprings series titled Maxon. Maxon is a close friend of Tempest, so in his novel did he see more of how damaged Tempest was/is? Because from what I saw Tempest managed just fine and if he can be Maxon’s friend, why not Portia’s mate?

I particularly like the part where Portia had to go back in time to convince Tempest to be her Gatherer and join her on her journey. It was a pretty cute scene and I love how it tied everything together. I also appreciated how it was her love for him that changed him and turned him into the man she would come to love. Also it was really sweet how he waited 20 years for her. We all want an epic love like that, that spans time and distance.
To me it felt like the book was really rushed. It was kind of like quest #1? Check. Quest #2? Check. And so on and so forth. The tasks seemed to be handled too easy and moved along too smoothly. There were no mistakes made that would make it seem more realistic and like  a part of our everyday life. I don’t particularly love it when my characters are infallible because I know human beings aren’t.
So, overall as I said before I feel like this book had so much potential that wasn’t fully reached. Not to say that this wasn’t a good book, I just would have liked more from it. I could see this book being turned into a duology and that would be totally fine. I just think that if a little more time was spent with the characters and on their mission it would be for the best. I would read another book from this world though because I love the world, and just to see how it compares. So this book gets 3 out of 5 stars.
Share This:

Cover Reveal: The Dragons of Nova By: Elise Kova