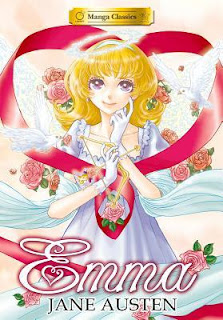 This manga adaptation went on sale on June 16, 2015. This means it was brought out in time for the 200th anniversary of the novel by Jane Austen.

I read a lot of manga and so I was extremely happy to see this. I have also meant to to read a lot more of the “classics” but with new books coming out every week I never seem to have enough time! I would just like everyone reading this review to note that I have NOT read the original novel before I read this manga.

The plot seemed like a fun story, but in the end it fell flat for me and ended up irritating me. This was surprising for me since I loved Pride and Prejudice by Jane Austen. Although the manga got more tolerable and actually enjoyable when it focused on the ongoing relationships rather than Emma interfering and making a mess of everything. Around the time that Emma realized that she was in love and focused on her own love rather than meddling in others was when it got the best for me.

Since the book is titled Emma, it makes sense that the manga focuses on her. I am sad to say instead of cute and quirky, I found Emma to be just annoying. There were many times I wished I could drag her out of the manga and throttle her! Emma epitomizes the saying “leave well enough alone.” I did connect with Emma on one level though because we are both romantics at heart who want everyone around us happy and in love. I also found Emma was at times a hypocrite. At one point she blames Mr. Elton for not considering her friend Harriet in marriage because of her social class but Emma herself told Harriet to turn down her first marriage proposal from Mr Martin because he was in a lower social caste than Harriet as a farmer. So that bothered me a little too. Lastly, Emma also doesn’t seem to understand or care about the emotional toll it takes on the people that are part of her matchmaking schemes. I just have to keep reminding myself that it was a different time and she was a lady of leisure.

I didn’t really understand the character of Harriet though. She didn’t really seem to have any importance in the story except as a pawn for Emma to focus her matchmaking thoughts on. So I was kind of confused on why she was in the story in the first place.

The history in this seems to be pretty accurate in this depiction. Which is always a highlight for me because that is something I look for. The style of dress and the mannerisms are pretty good which just enhanced the manga for me. I am interested in reading other classics that have been done and their take in manga form. I am sure I will enjoy other classics since the main problem I had with this one was the storyline itself.
The plot in this book seemed to be rushed. It was like it was just one mishap for Emma after another after another. I feel like this manga could have been more than a standalone. It could have been a duology to give the plot a little more time to move along. Although, I must say that I am happy that everyone got a happily ever after in the end.
In the end, the artwork is really what saved this manga for me. Below are a couple of the amazing pages that are featured in this manga. 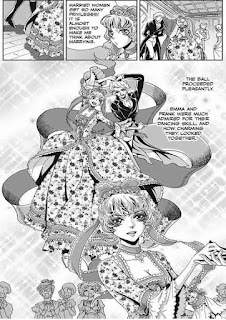 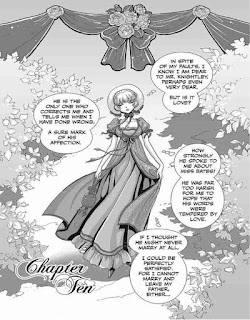 Overall this book like all manga was a nice and quick read. This is good especially if you are trying to introduce someone to the classics but don’t want them to get bogged down in a print book. I feel like manga and graphic novels are becoming more main stream now and having this book in manga form will reach out to a lot more people than just having the print book did. It makes me happy that there will be a wider audience now. Since I feel like a lot of people think the “classics” are boring and not a good read. There is now a wider audience and some who read the manga might love it so much that they are inspired to read the novel.
So even though the artwork was amazing, i had a lot of problems with the characters and the story. Therefore I felt like I could only give this book 2.5 out of 5 stars. I do plan on reading other manga classics though and I think I will enjoy them more since I already like the story behind it.
Share This:

Waiting on Wednesday: Empress of a Thousand Skies