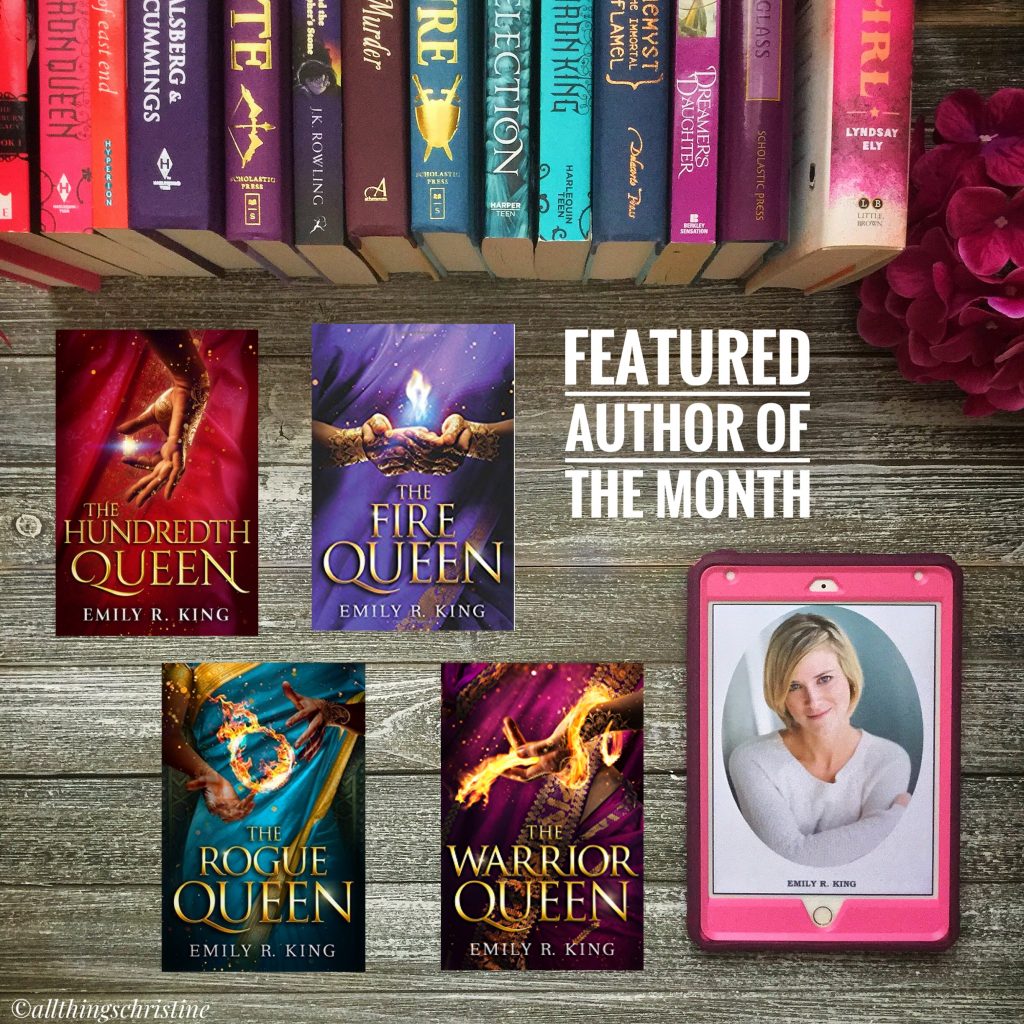 Hi guys and welcome to August’s Featured Author of the Month! This month I have the honour of featuring Emily R. King. The Hundredth Queen series has been on my radar for a long time and in honour of working with Emily I plan on binge reading the entire series this month! As my reviews become available I will link them in this post. So without further ado, let me introduce Emily! 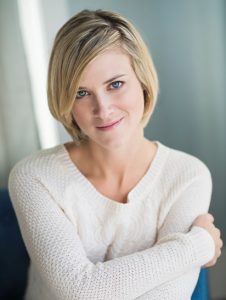 Emily R. King is a reader of everything and a writer of fantasy. Born in Canada and raised in the USA, she has perfected the use of “eh” and “y’all” and uses both interchangeably. Shark advocate, consumer of gummy bears, and islander at heart, Emily’s greatest interests are her four children. She’s a member of the Society of Children’s Book Writers and Illustrators and an active participant in her local writers’ community. She lives in Northern Utah with her family and their cantankerous cat.

allthingschristine: Hi Emily, and welcome to my blog!

Emily R. King: Hi, Christine. Thanks for having me!

AC: How are you today?

EK: I’m doing great, thanks. I’m excited about the release of The Warrior Queen!

AC: Let’s start off with a personal question I like to ask all authors. When you read or write can you see pictures in your head? (I cannot and it is called aphantasia). Do you think this helps or hinders your writing process?

EK: I am a very visual person. In fact, I struggle with auditory learning. No matter how hard I try to listen to audio books, I don’t retain much of what I hear. But when I see something, I’m much more likely to remember it. If that means I see pictures in my head, then yes! I can’t imagine writing without that skill.

AC: Congratulations on finishing The Hundredth Queen Series! (The final book The Warrior Queen is out August 14th). Why don’t you first talk about what your series is about?

EK: Thank you! I’m so happy to share the last installment of this series with my readers. For a while I was on the fence about whether a fourth book was necessary. I am very glad I wrote Warrior Queen. It is the ending Kali, Deven, and Ashwin deserve.

The Hundredth Queen series is the Bachelor meets the Hunger Games. A YA fantasy for readers who enjoyed The Selection, it follows orphan Kalinda as she is claimed to become the rajah’s hundredth wife. As his final viraji (betrothed) she must fight any of his courtesans who step forward in a tournament style battle. Winner takes the throne. It’s full of action, intrigue, strong sister warriors, and forbidden magic.

AC: How does it feel that you have now completed the series? Do you think you will ever come back to this world and explore it more?

EK: You know, I’m really satisfied with how the series ends. I would consider a spin-off someday, perhaps with Tinley or Indah, but I’ve no plans in the works at this time.

AC: I see you have started another series called The Evermore Chronicles, with the first book titled Carving Hearts. What can you tell us about it?

EK: Let me tell you a secret. My publisher changed the title of Carving Hearts (the first book in the three-book series) to Before the Broken Star. You’re the first blogger I’ve told. I’m waiting to share more news about The Evermore Chronicles once I get past the release of Warrior Queen. I want to give the conclusion of The Hundredth Queen series a big finale.

However, since you asked, The Evermore Chronicles follows Everley Donovan, the only surviving member of her family. She was saved from death by a mysterious clock heart that works in place of her old heart. To avenge her family, she hunts down the man who killed them, sailing to a forsaken island that is home to a time stalled kingdom. What she learns challenges everything she knows about their world and the monster she’s after. I’m pitching it as Sleeping Beauty meets Treasure Island.

AC: Thank you Emily for talking with me today!

EK: I appreciate your having me, Christine. Thank you very much.

AC: If you haven’t read any of Emily’s books yet then I definitely recommend going out and buying them now. You can find the links and synopsis for each of the books in the next section down below. 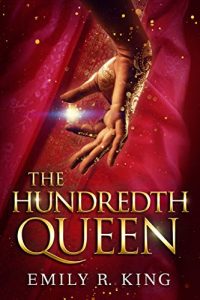 As an orphan ward of the Sisterhood in the ancient Tarachand Empire, eighteen-year-old Kalinda is destined for nothing more than a life of seclusion and prayer. Plagued by fevers, she’s an unlikely candidate for even a servant’s position, let alone a courtesan or wife. Her sole dream is to continue living in peace in the Sisterhood’s mountain temple.But a visit from the tyrant Rajah Tarek disrupts Kalinda’s life. Within hours, she is ripped from the comfort of her home, set on a desert trek, and ordered to fight for her place among the rajah’s ninety-nine wives and numerous courtesans. Her only solace comes in the company of her guard, the stoic but kind Captain Deven Naik.

Faced with the danger of a tournament to the death—and her growing affection for Deven—Kalinda has only one hope for escape, and it lies in an arcane, forbidden power buried within her. 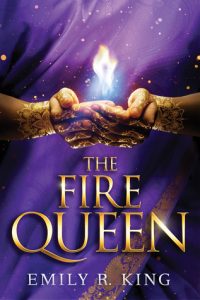 Though the tyrant rajah she was forced to marry is dead, Kalinda’s troubles are far from over. A warlord has invaded the imperial city, and now she’s in exile. But she isn’t alone. Kalinda has the allegiance of Captain Deven Naik, her guard and beloved, imprisoned for treason and stripped of command. With the empire at war, their best hope is to find Prince Ashwin, the rajah’s son, who has promised Deven’s freedom on one condition: that Kalinda will fight and defeat three formidable opponents.

But as Kalinda’s tournament strengths are once again challenged, so too is her relationship with Deven. While Deven fears her powers, Ashwin reveres them—as well as the courageous woman who wields them. Kalinda comes to regard Ashwin as the only man who can repair a warring world and finds herself torn between her allegiance to Deven and a newly found respect for the young prince.

With both the responsibility to protect her people and the fate of those she loves weighing heavily upon her, Kalinda is forced again to compete. She must test the limits of her fire powers and her hard-won wisdom. But will that be enough to unite the empire without sacrificing all she holds dear? 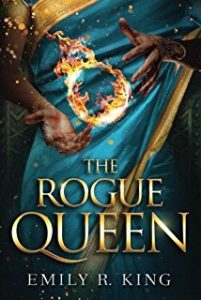 Despite the odds, Kalinda has survived it all: Marriage to a tyrant. Tournaments to the death. The forbidden power to rule fire. The icy touch of a demon.

That same demon now disguises itself as Rajah Tarek, Kalinda’s late husband and a man who has never stopped haunting her. Upon taking control of the palace and the army, the demon brands Kalinda and her companions as traitors to the empire. They flee across the sea, seeking haven in the Southern Isles.

In Lestari, Kalinda’s powers are not condemned, as they are in her land. Now free to use them to protect those she loves, Kalinda soon realizes that the demon has tainted her with a cold poison, rendering her fire uncontrollable. But the lack of control may be just what she needs to send the demon back to the darkest depths of the Void.

To take back the empire, Kalinda will ally with those she distrusts—and risk losing those most loyal to her—to defeat the demon and bring peace to a divided nation. 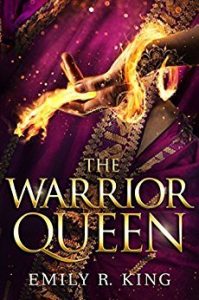 Kalinda has brought peace to the Tarachand Empire, at least for now. Bhutas no longer need to hide their gifts. The last of the rebels have been banished. And Prince Ashwin is set to take over as rajah.

But for Kalinda, this all came at a great loss. Her childhood home. Her best friend. The love of her life.

Deven is still trapped in the Void, although he is able to find his way to Kalinda each night. He has been lucky so far—mortals are not meant to last in the Void for long, and Deven has lasted longer than most. But when he doesn’t visit her one night, Kalinda knows that his luck has run out.

She will do whatever it takes to save the man she loves, even if it means convincing a god to guide her through the Void. Freeing a mortal from the Void is nearly impossible, but Kalinda has never let those odds stop her before…

I would like to give a giant shout out to Emily for agreeing to work with me this month. She is such a kind person and I feel like her books aren’t as widely known as they deserve to be! Have you read the Hundredth Queen Series? Are you eagerly awaiting the epic finale? Make sure you’ve pre-ordered so you don’t miss out on it. Leave a comment below if you’d like to say something to Emily or to talk about her series.