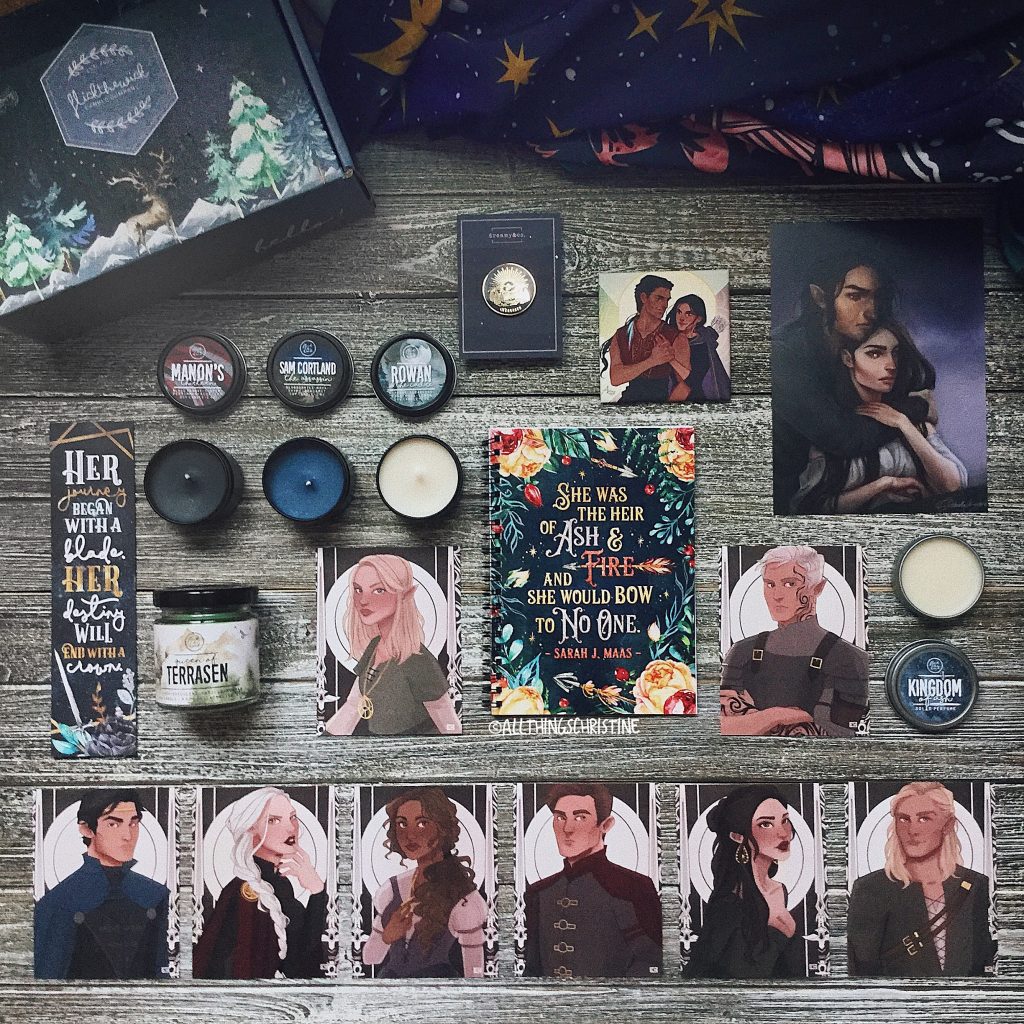 Today I have something really exciting on my blog! I recently got my first ever subscription box from Flick the Wick!!! I got their Terrasen Rising box (September 2018) which was inspired by Throne of Glass and the release of the final book in the series, Kingdom of Ash. If you’ve read the book already please do not put any spoilers in the comment because I have yet to read it. I will try to include links for where you can buy these items as a single product if they are available. Please click on the image to purchase the items. 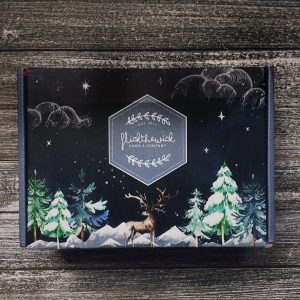 First of all I was super impressed with the box! And by box I mean the literal box it came in. You will probably hear me gush and talk about the lovely packaging until you are sick of it but I can’t help it! Flick the Wick does such an amazing job when it comes to packaging and the labels they are just always so wonderful. So I apologize in advance.


But doesn’t that lid just scream Terrasen in the winter? Or just winter in general? I choose to imagine that it isn’t a deer on the cover, but instead the Stag of Orynth. It just got my unboxing off to such a great start! The first item was a trio of mini 2oz soy candles and Sam Cortland was the first one I pulled out. The scents in the candle are: blueberry, musk, thyme and bergamot. I have yet to the Assassin’s Blade novella so I am not sure if blue has any significance or has anything to do with Sam.

To me, this candle smelled sweet and herbal at the same time. I wasn’t a huge fan of this candle, but it wasn’t like it was offensive or anything. I’m not sure if I am going to keep this candle or give it away. 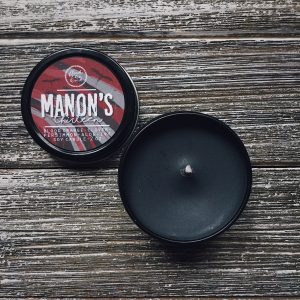 The second candle in the mini trio set was Manon’s thirteen. The scents in this candle are: blood orange, clover, persimmon, aloe and ivy. I’ve never seen a black candle before so I was surprised when I took of the lid. I thought it was going to be red to be honest.

This one had more of a subtle smell. I didn’t really get the blood orange or the persimmon to be honest. It smelled more like clover, aloe and ivy. I thought since Manon is such a strong, in your face character it would’ve had a stronger smell, but it didn’t. I liked the candle and I will probably keep this one. 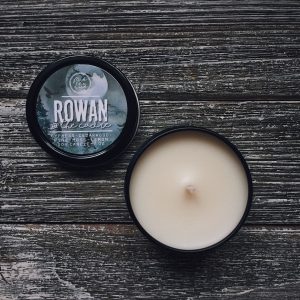 The scents in this candle are: cypress, cedarwood, pine, moss and lemon. The look of this candle was perfect for Rowan, but I don’t think it really demonstrated the Cadre though.

This just smelled like a forest to me. You know those days when you are walking through the forest after it rains and it smells all wet and green. I didn’t really smell any of the lemon in it though. The more I smelled it the more I was reminded of like the Bearwood from Old Spice. It was kind of like mens deodorant, which I actually quite like. 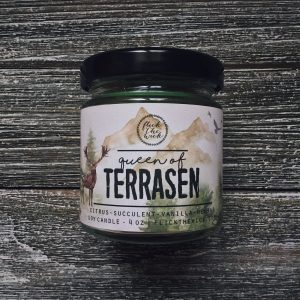 This was the only full size candle in the box which kind of surprised me. I thought there would be two or three. The scents for the full size candle are: citrus, succulent, vanilla and nectar. I have no idea what a succulent or nectar is supposed to smell like… It makes sense, with the forests and the Fae that the candle would be green.

I could definitely smell the citrus, but not so much the vanilla. It smelled kind of like a muted citrus. I really liked the smell of this candle and I’m so glad it is the full size! I am definitely keeping it. And look at the design of the label!!! Ugh, I love it so much. 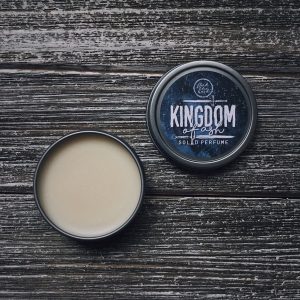 I’ve never gotten a solid perfume or used one before so I was really surprised to see it in the box! The solid perfume didn’t have the scents that were in it on the tin, but to me it smelled like a bar of Dove soap. Upon looking at the spoiler card later it described the smell as soft blue musk. It just smelled like Dove soap after I’ve got a shower to me.

This is an item that I will be giving away. I don’t like the idea of the perfume being on my hands all day after putting it on. It wasn’t bad or anything, it is just something that I wouldn’t use. So it doesn’t make sense for me to hold onto it. 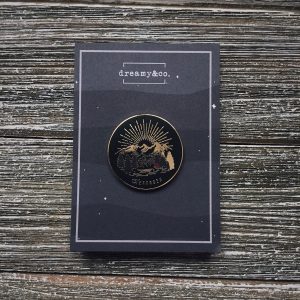 I was so excited to see this pin in the box! The pin was designed by DreamyandCo. Isn’t it just absolutely stunning!!! I love the forests and the mountains with the rising sun. The forest definitely seems to be a theme throughout the items in the box.

This pin was quite heavy with a double pin backing. It is a hard enamel pin and feels quite luxurious and like it is of good quality. The only thing I wish was different, was that maybe it had some colour in it. 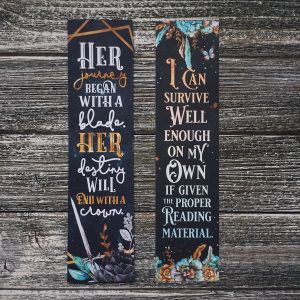 This bookmark is too pretty to even use! Designed by DreamyandCo it features two quotes from the Throne of Glass series. The quote on the left I haven’t read before which probably means it is from a book in the series that I haven’t read yet. The second quote on the right is from the first book and really applies to anyone who loves books and would rather be reading than doing anything else.

This bookmark is so lovely I don’t want to use it in case I wreck it! I don’t really use bookmarks anyways (you can find out why and more about me in my 15 Readerly Things blog post) instead I just memorize what page I am on. This isn’t too hard for me because I generally read only one book at a time. 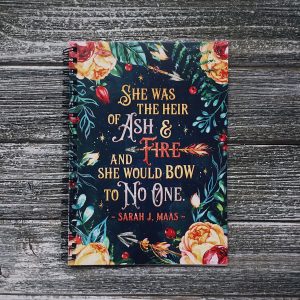 This notebook was designed by StellaBookishArt and it features one of the most well known quotes from the series and definitely one of my top 10. I’ve linked the bound version because I couldn’t find the spiral one.

It is just as lovely inside as it is on the outside. It has a flower at the top of each page and a little rattle the stars in the bottom right hand corner. Now I will say that this journal only has about maybe 50 pages in it at the absolute most. So it isn’t a large notebook and you will most likely go through it pretty fast. I have no idea what I am going to use this for, I don’t want to waste such a pretty cover! 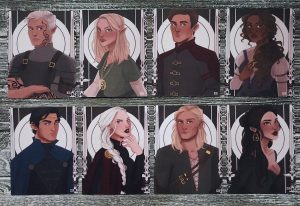 These stunning cards were created by Art by Emmilinne. They are hard some hard card stock which makes them flexible but not cheap feeling. I really want to put them all together in a frame like a collection of family photos. I think that would be hilarious. Otherwise I have no idea what to do with them.

I am ashamed to say that I had no idea who a couple of the characters were when I pulled them out. Well, thats not entirely true because I had an idea but I wasn’t sure. I did get one person wrong though….. I thought Yrene was Nesryn. But these while not perfect are pretty close to how I imagined most of these characters. I will say that the male characters I imagined a bit different, but the female characters are quite close! Which one is your favourite? 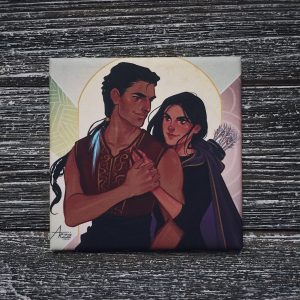 This lovely magnet was made by Loweana Art. The magnet is quite heavy and doesn’t feel like the picture will fade or chip anytime soon. The only negative thing I have to say about it is the corners are quite sharp so I would keep it away from small children.

I had no idea who was on this magnet when I first pulled it out of the box. It wasn’t until I read the spoiler card later that I discovered it was Sartaq and Nesryn. I am so behind on this series it isn’t even funny! I’m looking forward to finding out who Sartaq is though! I have a feeling it will be in Tower of Dawn… 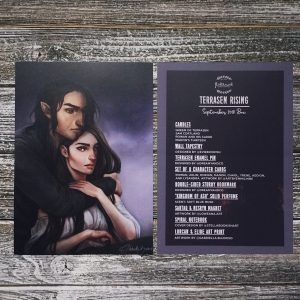 I love that there is art featured on the spoiler card itself in the box. Again, I am so behind on this series that I wasn’t sure who this image was depicting. It wasn’t until I looked at the back that I realized it was Lorcan and Elide. The art for the card was done by Gabriella Bujdoso.

The card is on thicker card, but it is not as thick as the card used for the character cards. If you aren’t careful when bending it you could definitely damage it. I’ve seen all of the incorrect conversations on Pinterest with Lorcan falling head over heels for Elide and Elide not giving a crap. I cannot wait to see how that gets translated in the book! It is going to make me laugh so hard!!! 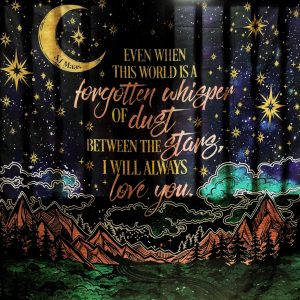 The last item really hit it out of the park in my opinion. The tapestry by Eviebookish is just absolutely stunning! I was actually astonished at how large it was. I had to hand it over my railing upstairs to even get a full shot of it. It features a quote that I haven’t read yet, but I can appreciate all the same.

The quality of the tapestry was a bit rough at first, but once I put in the wash and hung it to dry it ended up super soft and nice. I did punch up the colour saturation in the photo so you guys can see all of the colours, but they aren’t actually quite that bright in real life. The only real complaint I have is that the fabric is a bit thin. I am in love with this item in the box though and it may be my #1 fave. I have no idea where I am going to hang it but I will get it up somewhere!

Overall I was very happy with not only what I received in the box, but also how much I received. Because I live in Canada, with tax and shipping this box cost me about $70 CAD. So you can understand that I was kind of worried about spending that much money only to be disappointed. Luckily though this box exceeded my expectations! While I didn’t love and will most likely not keep every single item in the box I did get so many that I adored. I definitely feel like I got my money’s worth with the box, which I always do with Flick the Wick. If you are considering buying any single candles or a subscription box from Flick the Wick I definitely recommend it! I have never been disappointed buying anything from them and they always provide quality items.

If you want to watch my unboxing, you can find it below.