Movie Review: To All the Boys I’ve Loved Before 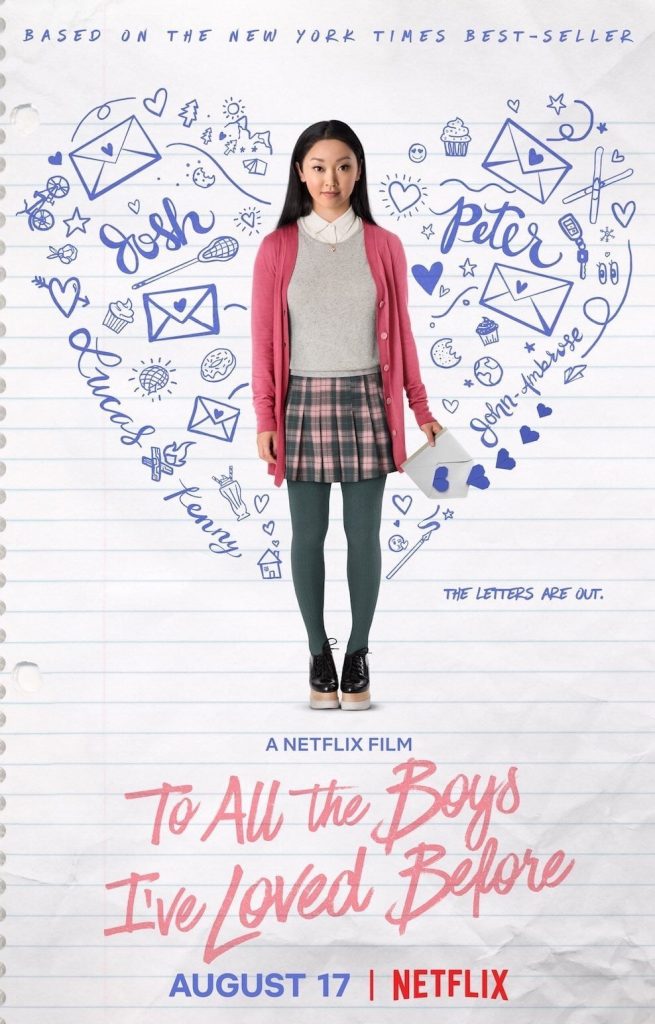 To All the Boys I’ve Loved Before has taken the world by storm when it released on August 17th. Having watched the trailer I knew that I was going to have to watch this movie as soon as it came out. I actually had to take breaks while watching the movie because I wanted to savour it and never end. Of course once I did finish it I ended up just watching it all over again.

This movie turned out to be everything I wanted it to be and more. Now to be fair I haven’t read the books before. Although now that I’ve seen the movie I want to read them as soon as possible. And I almost never want to read contemporary books. Luckily, I have them all! After falling in love with the movie I knew I had to have all of the books so I could read them so I grabbed the first two in hardcover since I already owned Always and Forever, Lara Jean. I even grabbed the movie tie-in! And if you know me, I really don’t like books that have the movie covers but I just had to have it!

I have never related to a contemporary character so much: we both dislike to drive, have similar style, prefer to write stuff in our heads than say them out loud, and don’t like to voice our thoughts when it comes to romance because we don’t want to take the risk. Although we are dissimilar in the fact that I don’t have multiple boys after me! I just really connected with Lara Jean and I could completely understand where she was coming from. One part of Lara Jean in the movie which was adorable and I adored was her clothing style! It actually inspired me to get some new pieces for my wardrobe that are more Lara Jean-esque.

I was a bit confused with the Song sisters since their family situation wasn’t really explained. We just kind of jumped into the story and I didn’t know if the parents were divorced, the dad was widowed, he was a single dad who adopted a bunch of kids or what. I am actually still a bit confused on the entirety of their family situation but I feel like when I read the books I will understand the dynamics a lot more.

Which brings me to my next point, I loved how very real issues: loss, sex, and sisterhood were brought up and discussed in the movie. We get to see Lara Jean refuse to be intimate with Peter whether it be kissing or sex to which his (correct) response was to not pressure her into anything she didn’t want to do. The idea that it is ok to wait I feel is frowned upon in modern society and I love that Lara Jean took this stance.

We also see both Lara Jean’s and Peter’s struggle with loss; Lara Jean dealing with her mother’s death and new family dynamic as well as the guilt that goes with the forgetting. And Peter dealing with the abandonment of his family by his father and the new family that has been created. I thought that this was just going to be a light rom-com to watch but it was unexpectedly deep. It deals with real issues that real teens may face and identify with which gave this movie its’ heart.

I’m surprised we didn’t get to see all 5 of the boys. We got to meet 3 of the 5 boys in the letters, well 4 if you count that little John Ambrose cameo at the end of the movie. I loved Lara Jean’s friendship with Lucas. It was super sweet and I loved to see her branching out to more than just Christine. I think it really helped her to have someone who understood her situation and could also give her a push to branch out and tell her when she’s being silly.

Peter was so sweet right off the bat, I loved his character so much. He doesn’t force Lara Jean to do anything she doesn’t want to, but he also does things that would help her come out of her shell and the small fantasy world she’s created for herself. I first felt like he was a good guy when he asked for privacy to let her down after reading her letter to him. Yes, it may’ve been a bad start to use Lara Jean to make his ex angry but that is really the only negative thing he did. He takes care of Kitty, supports Lara Jean even though they are only fake dating, spent time with her, got to know her and talked about the things that scare them, and so much more. I think most women and girls would agree with me when I say we all want our own Peter Kavinsky.

The only time I didn’t understand Lara Jean was how she treated Josh throughout the movie. I feel like she kind of just jerked him around and basically used him throughout it all. She went to him when she needed to talk things to or comfort herself but then would only talk about what she did and then leave. I just kind of felt bad for him because he wanted to talk about the letter and she didn’t. She kind of just said it is in the past and I’m done talking. I ended up feeling bad for his character.

The casting was on point for me. I loved all of the characters and felt like they fit their roles pretty well. Now I haven’t had the chance to imagine what they look like from the books and now going into the books I’m only going to be able to think of the actors….. But Noah Centineo is totally adorable so I don’t mind. I think all of the actors were separate and memorable, even for the secondary characters like Lucas and Kitty. I have to say that Lana Condor as Lara Jean really was the icing on the cake. She held this movie together and really brought the other characters to the forefront.

I had some minor issues with the movie. Some people wear shoes in the house I know, but that scene where Margot got into bed with hers on drove me nuts. And how Lara jean was in full makeup at all time, even going to bed and in the morning. No girl wears makeup to bed unless it is a mistake cause that crap ruins your skin so fast! And no girl is in perfect makeup 24/7. I will admit that most movies do this to female characters though. And after the hot tub scene Peter is kind of wet but Lara jean and her nightgown are completely dry? When she was fully submersed in the water? And when they kiss at her door she falls into bed with perfect lip gloss. It was just little things like that that bothered me, it ruined the continuity of the scene. All in all they are really just minor things that I am nitpicking.

There was only one thing in the movie I would change. I wish we hadn’t seen Kitty go into Lara Jean’s room to grab the letters. It wasn’t outright shown that she mailed them but it was definitely implied. I wish we’d been lead to think that someone from goodwill mailed her letters. I feel like that would’ve had more of an impact if it was a big reveal at the end and I like the mystery it would’ve provided.

Overall this was an amazing movie and I definitely plan on watching it over again and again! I hope they continue on with the other two books because I think it would be popular. This movie shows not only that young adult movies can do well but movies with diverse casts are not only needed but wanted. If you haven’t watched this yet, what are you doing? Get on that right now! Just message me if you want to watch it together, because I’m always down for a rewatch.