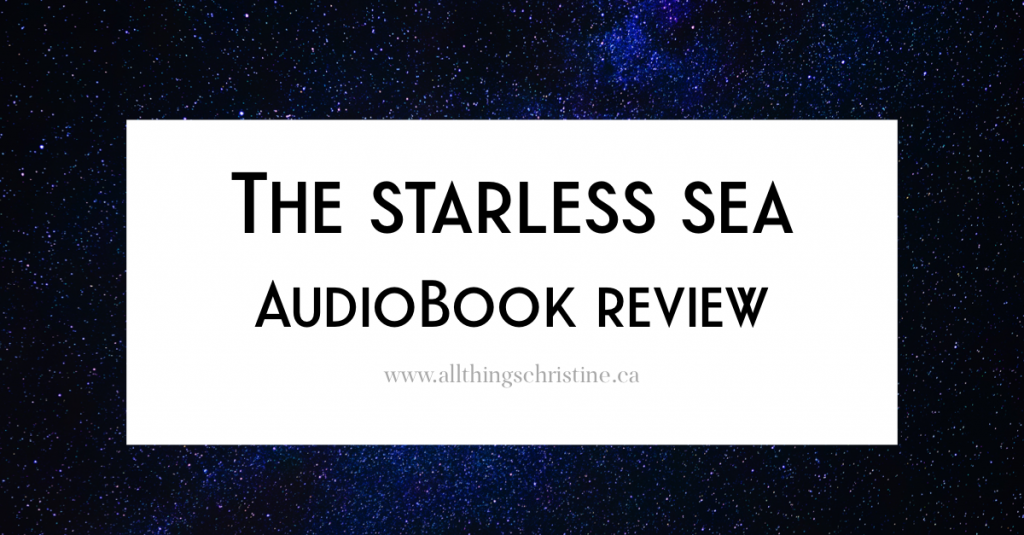 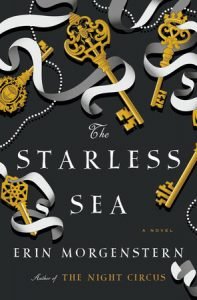 DISCLAIMER: This review contains spoilers, you have been warned. Read at your own risk!

All readers wish that a book from the library could set them on their own adventure. The Starless Sea does exactly what every reader (or at least this one) would love to have in real life. For me, this is a book for readers and for book lovers alike. That alone is reason enough to pick up this book.

I have heard of Erin Morgenstern so much and the Night Circus is so beloved that I was a bit nervous to start this book. What if I didn’t like it and I get lots of angry comments? But then I just decided to take the plunge, and state my true opinion afterwards no matter what. This is a book that I was listening to while I was at the gym, which is why it took me so long to finish it (about 3 weeks.) I am very glad that I chose to listen to The Starless Sea because I felt like I would’ve gotten frustrated with the story if it was a physical version and might have even DNF’d it.

The voice actors, while not the best were not bad either. There were a couple that were much better than others. But, I appreciate the fact that the used multiple narrators as these are the types of audiobooks I prefer to listen to (dramatized with a full cast). As I mentioned earlier, I am happy that I chose to listen to this story because I felt like it added much more to it. It was a bit easier for me to follow along with the twisted storyline because of the different voice actors. If I was just reading the text I would’ve gotten more confused and maybe dropped the book entirely. One thing to keep in mind though, this is a long audiobook. Somewhere over 18 hours long, just something to think of before jumping in.

This book….. the pacing was weird to be perfectly honest. Events were always happening and the story was moving along, but it also felt like the characters weren’t getting anywhere. We were always learning new information, but it kind of felt like we were just running on the spot. If I had to describe this book in one sentence, it would have to be multiple storylines intersecting each other. We see most of the characters at one point or another interact with each other, which was interesting to see how they relate to each other and the storyline.

The characters were well formed but for some reason still a little bit lacking for me. I think because the storyline jumped around so much we never got to really delve too deep into any of them. While I would love to be Zachary and go on this epic adventure, I believe that I am most like Kat Hawkins. The side character who is a complete nerd and is on the fringes of the story. She was adorable and relatable and I very much liked her character. Fate and Time were interesting, but I was kind of surprised they played less of a role in the whole story than I thought they would.

I also love the idea behind the Starless Sea. I love this haven of books and reading, I love the lore of Fate and Time, the Moon and the Owl King. Some of my favourite parts of the audiobook were when they were reading to stories featured in the story. It really expanded the world and gave little hints that I would try to work out as soon as possible. The Starless Sea I feel like is somewhere every reader would love to visit. To see every book in the world even as they are being enacted in real life. We all want a bit of book magic in our lives; to walk through a painted door and become a part of something more. But magic always comes with a price.

To be honest at times I thought that Zachary was Fate’s heart and his lover Dorian was Time. I thought that our evil nemesis Allegra would have more of a presence in the book (also not die off so easily). I thought a lot of characters would play a larger part to be honest, but for the most part all are side characters (even Fate and Time who are the reason for the whole adventure) except for Zachary and Dorian. It was a full story but for me it just felt like parts were underdeveloped and glossed over, but maybe those are the parts we aren’t meant to know.

I quite liked this book, but it also irritated me at the same time. The thing I disliked the most about it was the open ending. I don’t know if there is going to be a sequel to this book, but I hope so. I have so many questions that still need answers! What happened to Kat, did she go on her own adventure? We leave her sitting in the library deciding whether to or not. Did Dorian and Zachary turn out ok? What happened to the Starless Sea now that the Heart has disappeared? Do Max’s parents escape and find each other again? So many questions left unanswered by the end of the book.

Honestly, this book felt like it only grabbed little bits of each storyline, just enough for the reader to understand the situation without fully fleshing everything out. In the end, did the story really end? Or just continue on with different characters in the main roles under different names? I hope there is a sequel because open ended books tend to drive me nuts. I like my stories all solved and tied up in a bow.

Overall, The Starless Sea which is the first Erin Morgenstern book I read was a rather enjoyable one albeit a bit frustrating at times. I know this book has some difference in opinions when it comes to reader reviews, but I liked it. I imagine part of that would be because I haven’t read the Night Circus before this. But I would recommend this book if you want a roller coaster of a ride that all book lovers would want to go on. Also, one that really requires you to think and analyze the clues given. If anything else, read this book for the amazing and wondrous world created within it.

Have you guys read this book? What did you think of it? If you would like to see more of my audiobook reviews you can click here.